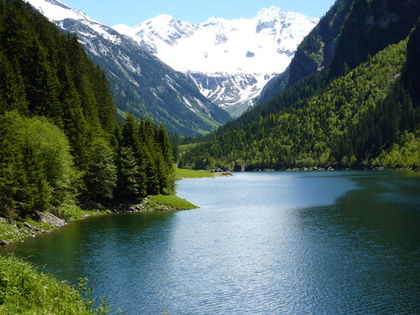 Photo by: by Paul

Monarchs who played a leading role in Austrian and world history include Rudolf I of Habsburg (1218–91), founder of the Habsburg dynasty and Holy Roman emperor from 1273; Maria Theresa (1717–80), who succeeded to the Habsburg dominions by means of the Pragmatic Sanction of 1740; her son Joseph II (1741–90), the "benevolent despot" who became Holy Roman emperor in 1765; Franz Josef (1830–1916), emperor of Austria at the outbreak of World War I; and his brother Maximilian (Ferdinand Maximilian Josef, 1832–1867), who became emperor of Mexico in 1864, ruling on behalf of Emperor Napoleon III of France, and was deposed and executed. Prince Klemens Wenzel Nepomuk Lothar von Metternich (1773–1859), Austrian foreign minister from 1809 to 1848, was the architect of the European balance of power established at the Congress of Vienna in 1815. Adolf Hitler (1889–1945), born in Braunau, was dictator of Germany from 1933 until his death. Leading Austrian statesmen since World War II are Bruno Kreisky (1911–1990), Socialist Party chairman and chancellor of Austria from 1970 to 1983; and Kurt Waldheim (b.1918), Austrian diplomat and foreign minister, who was UN secretary-general from 1971 to 1981 and was elected to the presidency in June 1986.

The Nobel Peace Prize was awarded to Baroness Berta Kinsky von Suttner (b.Prague, 1843–1914), founder of the Austrian Society of Peace Lovers and author of Lay Down Your Arms!, in 1905; and to Alfred Hermann Fried (1864–1921), a prolific publicist for the cause of international peace, in 1911. One of the most influential philosophers of the contemporary age was Ludwig Josef Johann Wittgenstein (1889–1951). Rudolf Steiner (1861–1925), the founder of anthroposophy, was an Austrian. Theodor Herzl (b.Budapest, 1860–1904), founder of the Zionist movement, was an early advocate of the establishment of a Jewish state in Palestine. Simon Wiesenthal (b.Poland, 1908), a Nazi concentration-camp survivor, has searched for Nazi war criminals around the world.

Austrians have excelled in international Alpine skiing competition. In 1956, Toni Sailer (b.1935) won all three Olympic gold medals in men's Alpine skiing events. Annemarie Moser-Pröll (b.1953) retired in 1980 after winning a record six women's World Cups, a record 62 World Cup races in all, and the 1980 women's downhill skiing Olympic championship. Franz Klammer (b.1953), who won the 1976 men's downhill Olympic title, excited spectators with his aggressive style. Arnold Schwarzenegger (b.1947) was once the foremost bodybuilder in the world and becaome a succesful Hollywood actor.

How interesting. I have been fascinated with the story of Emperor Franz Joseph. As a young emperor, under the influence of prime minister Schwarzenberg, absolutism seems to have been his goal. But what a hard (heart-breaking) road he had to follow.
Love the story of the Austrian Empire. 20th century history portrays Austria as a subsidiary power to that of Germany. That is how most of us were trained to think when Hitler took over the country. I am ignorant in the extreme. The story of the Habsburg Dynasty has begun to open my eyes to the history which shaped Europe over the centuries.