Armenian territories were first united into an empire under Tigranes the Great (95–55 BC ), whose extensive lands included parts of Syria and Iraq. Defeated by the Roman general Pompey, Armenia became a client state of the Roman Empire. Rome and Sasanian Persia partitioned Armenia, and after them Byzantium and the Ummayed and Abbasid caliphates controlled parts of Armenia. Armenia adopted Christianity at the beginning of the 4th century AD . The Seljuk Turks invaded Armenia in the 11th century, followed by Genghis Khan and Timur, leading to mass emigrations. Persia and Ottoman Turkey divided Armenia into eastern and western portions in the 16th–18th centuries. Russia took over Persia's holdings in 1828, and during the latter part of the 19th century both Russia and Turkey carried out harsh repression against nationalist activities among Armenians under their sway, leading to many deaths and mass emigrations. During World War I, Ottoman Turkey carried out forced resettlement and other harsh policies against Armenians, which Armenians term their national genocide. The historical experience remains a contentious issue in Armenian-Turkish relations.

After the Bolshevik revolution in Russia in 1917, Armenia declared independence in May 1918. Armenia's population of 750,000 included as many as 300,000 who had survived flight from Turkey, and the heavy burden of independence among hostile neighbors (it clashed with Turkey, Georgia, and Azerbaijan) and an inhospitable climate may have led to as many as 150,000 deaths from famine and disease. Although the August 1920 Treaty of Sevres accorded international recognition of Armenian independence, the Russian Red Army conquered Armenia in November 1920. In 1922, Armenia was named part of a Transcaucasian Soviet Federated Socialist Republic, which encompassed lands now in Armenia, Azerbaijan, and Georgia, but it became a separate union republic in 1936. During the 1920s, Moscow drew internal borders in the Caucasus, which resulted in Nagorno-Karabakh (NK), then a mostly ethnic Armenian region, being incorporated into Azerbaijan, separated from the rest of Soviet Armenia by a few miles of Azerbaijani territory. NK was given the status of an "autonomous republic."

Following a February 1988 call by the Nagorno Karabakh (NK) legislature for unification with Armenia, the Armenian Supreme Soviet in December 1989 declared that NK, a largely ethnically Armenian-populated enclave within Azerbaijan, was part of Armenia. It also proclaimed Armenia's sovereignty over its land and resources. A popular referendum on independence was held in Armenia on 21 September 1991, in which 94% of the eligible population reportedly participated and which was approved by 99%. The Armenian legislature declared Armenia's independence two days later. Armenia received worldwide diplomatic recognition upon the collapse of the Soviet Union in December 1991.

Beginning in 1988, conflict engulfed NK, with Azerbaijan resisting the secession or independence of its enclave. Casualties were estimated at over 5,000. Emigration of 350,000 Armenians residing in Azerbaijan and over one million Azerbaijani residing in Armenia or NK followed pogroms in both states and conflict in NK and surrounding areas. In December 1991, a referendum in NK (boycotted by local Azerbaijani) approved NK's independence and a Supreme Soviet was elected, which on 6 January 1992, declared NK's independence and futilely appealed 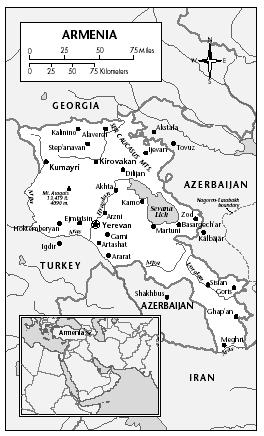 for world recognition. In 1993, Armenian forces gained control over NK and surrounding areas, occupying over 20% of Azerbaijani territory, which they continued to hold despite an Azerbaijani offensive in 1993–1994 that reportedly cost 6,000 Azeri casualties. A cease-fire has held fitfully since May 1994, but talks on a political settlement remain inconclusive. In the six-year period of conflict from 1988 to 1994, more than 35,000 people were killed and nearly one million have been left homeless.

In November 1989, Levon Ter-Petrosyan became a leader of the Armenian National Movement (ANM), which grew out of the Karabakh Committee to push for Armenia's independence, and its chairman in March 1990. ANM and other nationalist deputies cooperated to elect him chairman of the Armenian Supreme Soviet in August 1990, inflicting a serious blow on the Armenian Communist Party. Following Armenia's declaration of independence, presidential elections were held on 16 October 1991. Ter-Petrosyan was supported by the ANM, winning 83% of the vote against six other candidates, including internationally famous dissident Paruir Hairikian of the Association for National Self-Determination and Sos Sarkisyan of the Armenian Revolutionary Federation (ARF; called Dashnaktsutyun in Armenian, meaning "federation"). Ter-Petrosyan was sworn into office on 11 November 1991, for a five-year term. His suspension of the activities of Armenian Revolutionary Federation party in December 1994 and a trial of its leaders raised concerns among some observers about possible setbacks to democratization.

Elections to Armenia's unicameral 190-member National Assembly (legislature) were held in June 1995, at the same time as a referendum in which Armenian voters adopted the country's first post-Communist new constitution. International observers reported many campaign and voting irregularities. Observers from the Organization for Security and Cooperation in Europe (OSCE) judged the elections "free but not fair," in part because the main opposition party, the ARF, was banned from participation, the government dominated campaigning, the CEC appeared heavily pro-government in its decisions, and security officers constituted a chilling presence in many voting places. Voting irregularities reported on election day by the international observers included the violation of secret voting and pressure in voting places to cast a ballot for certain parties or candidates. In all, the Republic Bloc and other pro-government parties won 166 out of 190 seats, while the opposition won only 18 and independents four (two seats were undecided).

Ter-Petrosyan won reelection as president on 22 September 1996, by garnering 51.75% of the vote, a far smaller majority than in 1991, barely avoiding runoff balloting. Ter-Petrosyan's main opponent in the presidential race was Vazgen Manukian, head of the National Democratic Union (NDU) party. He garnered 41.3% of the presidential vote. Manukian had worked closely with Ter-Petrosyan in the Karabakh Committee. Following the presidential election, followers of Manukian's electoral coalition demonstrated against what they and many international observers termed irregular voting procedures. On 25 September 1996, tens of thousands of protesters stormed the legislative building in Yerevan and assaulted the legislative speaker and deputy speaker, both belonging to the ANM. The crowd was dispersed by police with few injuries or deaths.

In March 1997, in an attempt to garner greater public support for his regime, Ter-Petrosyan appointed a highly popular war hero of the NK conflict, Robert Kocharian, to the post of prime minister of Armenia. Ter-Petrosyan and others viewed Kocharian as having the leadership abilities necessary to help revive the slumping economy and to increase tax collection. In accepting the prime ministership, Kocharian resigned as president of NK.

Ter-Petrosyan announced in September 1997 that he had accepted an Organization for Security and Cooperation in Europe (OSCE) peace plan as a basis for resolving the NK conflict that would require "compromises" from Armenia. The two-stage plan called for NK Armenians to withdraw from most territories they had occupied outside of NK and for international peacekeepers to be deployed, followed by discussion of NK's status. The announcement brought open criticism from Kocharian and other Armenian and NK officials. On 1 February 1998, Yerkrapah, a legislative faction and militia group composed of veterans of the NK conflict, and headed by the country's defense minister, called for Ter-Petrosyan to resign. Many members of Ter-Petrosyan's ANM legislative faction defected, leading to the resignation of the parliamentary speaker. Heated debate in the legislature culminated with Ter-Petrosyan's resignation on 3 February 1998. Ter-Petrosyan denounced the "bodies of power" for demanding his resignation, referring obliquely to Kocharian, Defense Minister Vazgen Sarkisyan, and Minister of the Interior and National Security Serzh Sarkisyan. Although the constitution called for the legislative speaker to assume the duties of acting president pending an election, the resignation of the speaker caused these duties to devolved upon Prime Minister Kocharian. A special presidential election was scheduled for 16 March 1998.

Twelve candidates succeeded in registering for the March presidential election. The main contenders were Kocharian, Vazgen Manukyan (who had run against Ter-Petrosyan in 1996 and was head of the National Democratic Union), and Karen Demirchyan (head of the Armenian Communist Party from 1974 to 1988). Since none of the candidates won the required "50% plus one" of the 1.46 million votes cast (in a 64% turnout), a runoff election was held on 30 March. In the runoff, acting President and Prime Minister Kocharian received 59.5% of 1.57 million votes cast (in a 68.5% turnout). The OSCE concluded that "this election showed improvement in some respects over the 1996 election," but did "not meet OSCE standards to which Armenia has committed itself." Observers alleged ballot box stuffing, discrepancies in vote counting, and fraud perpetrated by local authorities that inflated the number of votes for Kocharian. Nevertheless, he was inaugurated on 9 April 1998. The legislature selected Demirchyan as its speaker on 10 June.

On 27 October 1999, gunmen entered the legislature and opened fire on deputies and officials, killing Prime Minister Vazgen Sarkisyan and Speaker Karen Demirchyan, two deputy speakers, and four others. The purported leader of the gunmen claimed they were targeting the prime minister and were launching a coup to "restore democracy" and end poverty, and took dozens hostage. President Robert Kocharian rushed to the legislature and helped negotiate the release of the hostages, promising the gunmen a fair trial. The killings appeared the product of personal and clan grievances. Abiding by the constitution, the legislature met on 2 November and appointed Armen Khachatryan (a member of the majority Unity bloc) as speaker, and Kocharian named Sarkisyan's brother Aram the new prime minister the next day, seeking to preserve political balances. Political infighting intensified. The military prosecutor investigating the assassinations detained a presidential aide, appearing to implicate Kocharian in the assassinations. The Unity and Stability factions in the legislature also threatened to impeach Kocharian in April 2000. Seeking to counter challenges to his power, Kocharian in May 2000 fired his prime minister and defense minister. In October 2001, on the second anniversary of the shootings in parliament, thousands of protesters staged demonstrations in Yerevan to demand Kocharian's resignation. As of February 2003, the assassination trial continued.

Although Armenia has the highest economic growth rate of any country in the former Soviet Union, more than 50% of the population lives in poverty. Unemployment and emigration remain problems, and Armenia is under a trade blockade from Turkey and Azerbaijan over the dispute in Nagorno-Karabakh— goods are transported only through Georgia. However, US and European companies interested in tapping oil and gas reserves in the Caspian Sea have been planning the construction of a pipeline through the Caucasus to Turkey. In September 2001, Russian President Vladimir Putin visited Armenia, the first Russian president to do so since independence. Armenia and Russia negotiated a 10-year economic cooperation package, and an agreement was reached on expanding a Russian military base in Armenia.

Presidential elections were held on 19 February 2003, with no candidate receiving 50% of the votes; a runoff election was scheduled for 5 March. Kocharian took 48.3% of the first-round vote, with Stepan Demirchyan—son of Karen Demirchyan, the former parliamentary speaker assassinated in 1999—taking 27.4% of the vote. Artashes Geghamian came in third with 16.9%. The opposition called the election fraudulent and said it would not recognize the vote, and observers from the Organization for Security and Cooperation in Europe (OSCE) declared the election "flawed." Stuffing of ballot boxes allegedly took place, although many ballots were cast in transparent boxes, in an attempt to have a fair vote. Also, Kocharian received five times as much television coverage as all of his opponents combined.