Albania began its transition from a centrally-planned economy to a market driven economy in 1992, after GDP had collapsed by over 50% in 1989. The government elected in 1992 set in motion a series of aggressive economic reforms to light the path towards a market economy. Among the reforms were price and exchange regime liberalization, fiscal consolidation, monetary restraint, and a rigid income policy. Stalling progress in 1997 was followed by a resumption of growth the next year. 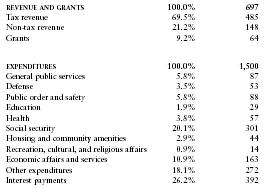