The US Central Intelligence Agency (CIA) reports that in 2002 the purchasing power parity of Albania's exports was $340 million while imports totaled $1.5 billion resulting in a trade deficit of $1.16 billion.

The International Monetary Fund (IMF) reports that in 2001 Albania had exports of goods totaling $305 million and imports totaling $1.33 billion. The services credit totaled $534 million and debit $444 million. The IMF attributes the fall in exports in recent years to a decline in industrial production. Recent increases in imports were due to increased domestic demand for imported goods, in addition to large increases in electricity imports. Remittances from abroad have improved Albania's balance of payments. The following table summarizes Albania's balance of payments as reported by the IMF for 2001 in millions of US dollars. 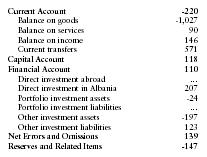