The US Central Intelligence Agency (CIA) estimates that in 2001 Yemen's central government took in revenues of approximately $3 billion and had expenditures of $3.1 billion. Overall, the government registered a deficit of approximately $100 million. External debt totaled $4.7 billion. Since unification, Yemen has run a budget deficit equivalent to 10–20% of GDP, financed primarily by bank credit. Yemen's decision to back Iraq in the Gulf War caused it to lose some $2 billion in development aid. The civil conflict in 1994 also exacerbated the need for external assistance and debt restructuring. The government estimated revenues would increase by 90% to YR 301 billion in 1997, while expenditures would rise 72.5% to YR 313 billion at that time. Increased oil revenues were expected to provide most of the increase in revenues. 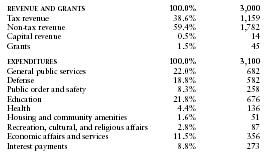