Yemen's balance of payments was adversely affected in the early 1990s, as other nations sought to economically punish Yemen for its support of Iraq during the Persian Gulf War. In 1993, the current account deficit reached a peak of $1,217 million, foreign exchange reserves sank to just $144.6 million, and the trade deficit was $920 million. Transfers, consisting largely of remittances from Yemenis working in other Gulf states fell by 42% between 1990 and 1993.

As of the early 2000s, Yemen's balance of payments position had substantially improved: its current account surplus stood at $1.8 billion in 2000, up from a $455 million deficit in 1998. Yemen's bilateral and multilateral debt situation has also improved in recent years, with debt to Russia reduced, debt rescheduling by the Paris Club, and financing from the World Bank and IMF. In 2001, Yemen's outstanding debts stood at approximately $4.8 billion, or 80% of GDP.

The US Central Intelligence Agency (CIA) reports that in 2001 the purchasing power parity of Yemen's exports was $3.9 billion while imports totaled $3 billion resulting in a trade surplus of $900 million.

The International Monetary Fund (IMF) reports that in 2000 Yemen had exports of goods totaling $4.09 billion and imports totaling $2.48 billion. The services credit totaled $211 million and debit $809 million. The following table summarizes Yemen's balance of payments as reported by the IMF for 2000 in millions of US dollars. 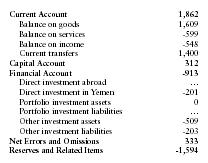