Although the Portuguese navigator Pedro Fernandes de Queir established a short-lived settlement on Espiritu Santo in 1606, little more is known about the history of the New Hebrides until French and British explorers arrived in the late 18th century. Captain James Cook discovered, named, and charted most of the southern islands in 1774. The next century brought British and French missionaries, planters, and traders, and for many years the islanders suffered from the depredations of the recruiting ships and from other lawless acts by Europeans in the region.

By the Anglo-French Convention of 1887, a joint naval commission was established, with a resident commissioner to protect the lives and interests of the islanders. In 1906 following a London conference, the Anglo-French Condominium was established, largely to settle land claims and to end difficulties caused by lack of clear local jurisdiction. Indigenous political activity developed after World War II, with increasing native concern over land alienation and European dominance.

In 1975 a representative assembly replaced the nominated advisory council under which the New Hebrides had been governed; twenty-nine assembly members were elected by universal suffrage, nine members represented economic interests, and four members represented the traditional chiefs. In 1977 the National Party (Vanuaaku Pati), which held twenty-one of forty-two assembly seats, demanded independence and staged a boycott of the legislature; in response, at a conference in Paris, self-government was agreed on for 1978, to be followed by a 1980 referendum on independence. After considerable difficulty, a constitutional conference in 1979 finally agreed on an independence constitution. In the November 1979 elections for a newly constituted, fully elective assembly, the National Party, led by Father Walter Lini, obtained twenty-six of the thirty-nine seats.

In May 1980 however, a dissident francophone group, based on Espiritu Santo, attempted to break away and declared an independent government of Vemarana, under Jimmy Stevens and the Nagriamal Party. Attempts made during June to resolve the differences between the new central government and the rebels failed, and UK and French troops were sent to Luganville on 24 July. No shots were fired, but the soldiers remained until Vanuatu's formal declaration of independence on 30 July 1980. They were then replaced at the new government's request by forces from Papua New Guinea, who were assisted by the local police in putting down the rebellion.

Since independence, Vanuatu (Our Land Forever) has followed a nonaligned foreign policy. As of late 1987, it was the only South Pacific nation to have joined the nonaligned movement, and in January 1987 it signed a controversial fishing agreement with the USSR. In May 1987 Vanuatu announced a ban on all military ships and aircraft in a dispute over a proposed Libyan diplomatic mission. The dispute ended with the expulsion of two Libyan diplomats. Relations with the French government remained strained throughout much of the Lini government's rule, though they improved at the end of 1989 with the signing of the Matignon Accord relating to New Caledonia.

In December 1988 President George Ati Sokomanu attempted to dismiss the Lini government by ordering the dissolution of the country's parliament. Sokomanu appointed Barak Sope as prime minister. Lini refused to surrender office and reconvened parliament. Sope and several supporters were arrested and charged with inciting mutiny. Sope was sentenced to six years' imprisonment.

Fr. Lini lost a parliamentary vote of confidence in September 1991 and he was replaced by Donald Kalpokas. In December 1991 the francophone Union of Moderate Parties (UMP), led by Maxime Carlot Korman, won the largest bloc of seats and formed a coalition government with the National United Party (NUP), led by Lini. Strains between the coalition members led to Lini joining the opposition in August 1993, but Carlot Korman's government survived the defection.

Parliamentary elections were again held in 1995, with the UMP winning slightly more seats than the Vanuatu Party (VP), led by Donald Kalpokas. Rialuth Serge Vohor was prime minister from November 1995 until a no-confidence vote in parliament forced his resignation on 7 February 1996. Maxime Carlot Korman was elected prime minister, forming a coalition, and parliament appointed Kalpokas deputy prime minister. The coalition was considered to be weak, however. On 30 September 1996 Korman was ousted by a no-confidence motion. Vohor was reelected as prime minister. The Vohor government repealed the Ombudsman's Act, but President Jean Marie Leye refused to declare this piece of legislation as law. Leye, in the face of dissent and political crises, took action to dissolve parliament. The ruling coalition refused to step down, questioning the constitutional right of Leye to do this. The Court of Appeal ruled in January 1998 that Leye's actions were legal, thus opening the way for a new general election. In the election held 6 March 1998 the VP of Kalpokas improved its earlier performance, but could not claim a majority. Kalpokas rejoined forces with Fr. Lini and the NUP and coalesced with minority party legislators to gain a clear majority. Kalpokas was elected prime minister. Willie Jimmy was named deputy prime minister on 19 October 1998. Kalpokas resigned to avoid a no-confidence vote in late 1999, and Barak Sope of Melanesian Progressive Party (MPP) became prime minister. In 1999, the government introduced a Comprehensive Reform Program, to combat corruption and abuse of power by government officials. It included a revamping of state administration, an increase in private sector development, a reduction in the public service sector, and the enactment of a leadership code of conduct.

At the South Pacific Forum in June 1999 Vanuatu supported a proposed Pacific Free Trade Area (FTA) that would initially include fourteen countries in the region. The South Pacific Forum set up the Pacific Kava Council to work at protecting the regional rights to kava and its uses. The kava plant's reputed relaxation properties had attracted the attention of producers of herbal medicines. The establishment of kava plantations in Central America threatened the Pacific Islands' production. Vanuatu joined with other small island developing states (SIDS) through the United Nations SIDSnet, an Internet project linking over forty 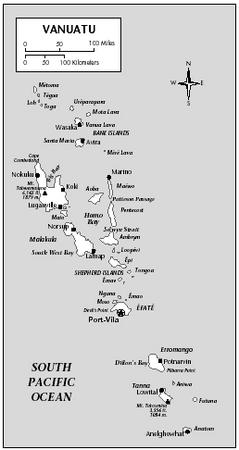 island nations worldwide to address issues like the economic hurdles of isolation and small markets. The United Nations Environment Program (UNEP) issued a report assessing the ecological and population threats faced by SIDS, Vanuatu included. The UN's Intergovernmental Panel on Climate Change announced its predictions on the consequences of global warming. Vanuatu was mentioned as already affected by inundation of low-lying areas and coastal regions by rising oceans.

In April 2001, Barak Sope was ousted as prime minister in a vote of no confidence, and Edward Natapei became prime minister. The new government undertook investigations into Sope's business dealings, and in November, Sope was charged with two counts of forgery. He was sentenced to three years' imprisonment but was subsequently pardoned by President Fr. John Bani. Natapei was reelected prime minister in May 2002, after parliamentary elections held on 30 April, in which his Vanua'aku Party took 15 seats and the Union of Moderate Parties took 14 seats.

I used this and loved it it helped me with my project a ton!
2
Phillip

Wow, Vanuatu is a very interesting place. Thank you, you have answered all of my questions. I love you guys. I would like to thank you for everything you have done for me. Well, please email me. Love from Belinda.