A federal budget is prepared according to the UAE's development policy, while each emirate is responsible for municipal budgets and local projects. Conservative public expenditure policies have become more necessary as oil revenues have declined since 1983. Deficit spending is common. Abu Dhabi's oil income accounts for the bulk of federal revenues; under the constitution, each emirate contributes 50% of its net oil income to the federal budget. 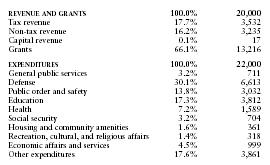