Although the Trucial Coast has for centuries been situated on one of the main trade routes between Asia and Europe, very little is known about the early history of the states that now make up the United Arab Emirates. The northern states of the United Arab Emirates, and in particular Ra's al-Khaimah, first came into historic prominence during the period of Portuguese occupation 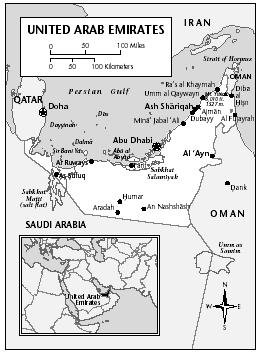 in the 16th and early 17th centuries, when Portugal used the territories as a base to fight a rear guard action against Persia. At that time and down to the mid-18th century, neighboring Oman played an integral role in the history of the maritime states.

Abu Dhabi island was settled by its present ruling family, Al-Nahyan, toward the end of the 18th century, and Dubai was founded by an offshoot of the same family in 1833. The late 18th and 19th centuries brought the division of the area between the Nahyan and the Qawasim, who ruled Ra's al-Khaimah and neighboring territories and whose clashes with British and Indian shipping led to British naval expeditions against what came to be known as the Pirate Coast. Treaties concluded in 1820 and 1835 established a formal relationship between the states of the southern Gulf and Britain that was to last until 1971. In 1853, the sheikhs agreed to a "perpetual maritime truce" to be enforced by the British navy. Under a treaty signed in 1892, the United Kingdom promised to protect the Trucial Coast from all aggression by sea and to lend its good offices in case of land attack. In 1955, the United Kingdom effectively intervened on the side of Abu Dhabi in the latter's dispute with Sa'udi Arabia over the Buraymi oasis, control of which is now shared by Abu Dhabi and Oman.

When, in 1968, the United Kingdom announced its intention to withdraw its forces from the area, a decision to establish a federation of Arab emirates—embracing the seven Trucial States, Bahrain, and Qatar—was agreed on in principle. However, it proved impossible to reconcile the differences among all the members six Trucial States (excluding Ra's al-Khaimah) agreed on the establishment of the United Arab Emirates, which was officially proclaimed a sovereign, independent nation on 2 December 1971, with Ra's al-Khaimah joining in early 1972.

Externally, the move to independence in 1971 placed the United Arab Emirates in difficult straits with its two powerful neighbors, Sa'udi Arabia and Iran. Sa'udi Arabia asserted a territorial claim on a group of oases in the south of the United Arab Emirates, and Iran laid claim to its offshore islands. In 1974, a border agreement on the Liwa' oases was signed with Sa'udi Arabia, but apparently has not been fully recognized by the rulers of either country. The dispute with Iran over the Abu Musa and Tumb Islands became tense when Iranian forces unilaterally asserted control over the UAE section of Abu Musa in 1992. In 1996, Iran rejected a proposal by the Gulf Cooperation Council (GCC) to put the dispute over the islands to the International Court of Justice (ICJ) for arbitration. In 2003, Iran still occupied the islands. In the dispute, the United Arab Emirates has received support from the GCC, UN, and the United States.

The United Arab Emirates became a founding member in 1981 of the Gulf Cooperation Council (GCC), a political and economic alliance directed, at least implicitly, against Iran. During the Iran-Iraq war, the United Arab Emirates gave aid to Iraq but also maintained diplomatic relations with Iran and sought to mediate the conflict.

During the Yugoslav civil war, the United Arab Emirates airlifted wounded Bosnian Muslim women and their families to Abu Dhabi, where they were given free medical treatment and housing, and financial support for one year. The country has also given heavily to Red Crescent relief organizations in Bosnia. Unlike its neighbors and partners in the GCC, Oman and Qatar, the United Arab Emirates did not establish liaison offices in Israel—although it relaxed the Arab-wide boycott of Israel in the hope that lasting peace between the Palestinians and Israel would be forthcoming as a result of the Oslo Accords.

In 1991, the Bank of Commerce and Credit International (BCCI), which was based in the United Arab Emirates and largely owned by the ruling family of Abu Dhabi, collapsed, causing repercussions all around the world. Accused of fraudulent dealings, the bank was officially liquidated in 1996, and the UAE cabinet resigned the following year. A sharp decline in oil prices in 1998 strongly affected the economy of the United Arab Emirates, which recorded a drop of almost 6% in its GDP. At the end of 1999, the United Arab Emirates celebrated the 25th anniversary of its founding, and the 30th anniversary of rule its president, Sheikh Zayid Bin Sultan Al Nuhayyan.

During 2002 and into 2003, the United Arab Emirates, along with the other countries of the Persian Gulf, were confronted with the situation of a potential US-led war with Iraq. On 8 November 2002, the UN Security Council unanimously passed Resolution 1441, calling on Iraq to immediately disarm itself of weapons of mass destruction (WMD) and WMD weapons capabilities, to allow the immediate return of IAEA and UN weapons inspectors, and to comply with all previous UN resolutions regarding the country since the end of the Gulf War in 1991. If Iraq was found to be in "material breach" of the resolution, "serious consequences" were to result. The United States and the United Kingdom began amassing troops in the region, and by the end of February 2003, the number of troops in the Persian Gulf was approximately 200,000. As of 1 February, there were 500 US military personnel and 7 aircraft based at Al Dhafra, and a detachment of Canadian Aurora maritime patrol aircraft in the United Arab Emirates. At an Arab League summit held at Sharm el-Sheik, Egypt, on 1 March, sharp divisions between Arab leaders on the Iraq situation emerged, particularly between Libya and Sa'udi Arabia. However, the leaders issued a declaration expressing "complete rejection of any aggression on Iraq," and called for continuing UN weapons inspections. It also called upon Iraq to disarm itself of WMD and the missiles needed to deliver them. At the summit, some leaders argued war was inevitable and that the countries of the region should prepare for its aftermath; some argued that war could be avoided if Iraq were to comply with weapons inspections; and a third group argued that the summit should issue an unequivocal anti-war declaration. At the summit, Sheikh Zayid Bin Sultan Al Nuhayyan called upon Iraqi president Saddam Hussein to relinquish power and leave Iraq in exchange for immunity from prosecution. Iraq would be placed under the tutelage of the UN and the Arab League until a new government could be formed. Bahrain and Kuwait supported the UAE proposal.