The islands were probably settled between the 14th and 17th centuries by Polynesians drifting west with prevailing winds from Samoa and other large islands. The first European to discover Tuvalu is thought to have been the Spanish navigator çlvaro de Menda–a de Neyra, who sighted Nui in 1568 and Niulakita in 1595. Further European contact was not made until the end of the 18th century. Between 1850 and 1875, the islands were raided by ships forcibly recruiting plantation workers for South America, Fiji, Hawaii, Tahiti, and Queensland. To help suppress such abuses, the Office of British High Commissioner for the Western Pacific was created in 1877.

In 1892, after ascertaining the inhabitants' wishes, the United Kingdom proclaimed the Ellice Islands (as Tuvalu was then known), together with the Gilberts, as a British protectorate. After further consultation, the protectorate became the Gilbert and Ellice Islands Colony in 1916. After the Gilberts were occupied by the Japanese in 1942, US forces occupied the Ellice group in 1943 and drove the Japanese out of the Gilberts. After the war, the ethnic differences between the Micronesians of the Gilberts and the Polynesians of the Ellice Islands led the Ellice Islanders to demand separation. In 1973, a British commissioner appointed to examine the situation recommended administrative separation of the two island groups. The British government agreed, provided that the Ellice Islanders declared their wishes by referendum. The vote, held during August-September 1974 with UN observers in attendance, produced an overwhelming majority of 3,799–293 for separation. Accordingly, on 1 October 1975, the Ellice Islands were established as the separate British colony of Tuvalu, and a ministerial system was instituted. Pursuant to a constitutional conference held at London in February 1978, Tuvalu became an independent member of the Commonwealth of Nations on 1 October 1979. Sir Fiatau Penitala Teo became Tuvalu's first governor-general, and Toaripi Lauti, chief minister at the time of independence, took office as Tuvalu's first prime minister. Following new elections in September 1981, Lauti was succeeded in office by Tomasi Puapua, who was reelected in September 1985. In March 1986, Tupua Leupena replaced Sir Fiatau Penitala Teo as governor-general. In a poll held that same year, Tuvaluans rejected the idea that Tuvalu should become a republic. As a result of the 1989 general election the parliament elected Bikenibeu Paeniu as prime minister in September 1989. In the same election, Naama Latasi became the first woman to serve in Tuvalu's parliament.

In the 1993 legislative elections Paeniu and Puapua, the man who he replaced as prime minister, each received six votes from the newly elected twelve-member parliament. A second round of votes were held in December that year, from which Puapua withdrew, and Kamuta Latasi was elected prime minister.

In 1994 Prime Minister Latasi spearheaded a movement to remove the British Union Jack from the country's flag as a symbolic gesture of independence. In 1995, after conservative French President Jacques Chirac announced his country's intention to conduct above-ground nuclear tests in the South Pacific, Tuvalu emerged as a regional leader in the highly vocal opposition.

In April 1997 the Union Jack was restored as part of Tuvalu's national flag by a vote of seven to five in the Parliament. Newly reelected Prime Minister Bikenibeau Paeniu restored the former flag design, which Latasi had changed without consideration of the views of Tuvalu's citizens. Tuvalu, Nauru, and Kiribati aligned with the Cook Islands and Niue to put pressure on Australian production of "greenhouse gases." These low-lying island nations are particularly vulnerable to future global warming. Already flooding in stormy weather, they pressed for a worldwide cut of 20% of 1990 emission levels by 2005. Australia rejected the proposal, citing 90,000 jobs would be lost if Australia was forced to reduce emissions. None of Tuvalu's islands rise more than 16 feet (5 m) above sea level, and their future existence may be imperiled.

By April 1999 there was growing dissatisfaction with Prime Minister Paeniu's leadership. Paeniu was forced to give up his office after a no confidence vote of parliament. On 27 April 1999 Ionatana Ionatana, former Minister of Education, was elected as prime minister by the twelve-member parliament.

In August 1999 Tuvalu sought economic aid as it suffered through a severe drought. Australia, New Zealand, Japan and Britain promised assistance to ease the water shortage with desalination plants. Japan agreed to provide the plants; New Zealand would pay to transport them. Australia would provide technical assistance toward formulating water policies.

Reportedly, Tuvalu licensed its dot-TV domain for $50 million over ten years to an Internet incubator. In February 2000 Prime 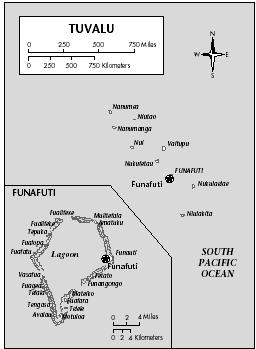 Minister Ionatana received the first installment of the licensing deal, $20 million, and invested it in trust funds. In the continuing dispute with Britain over Tuvaluan separation with the Gilberts (Kiribati), Ionatana suggested that Tuvalu become a republic.

On 9 December 2000, Ionatana collapsed from cardiac arrest and died. Tuvalu had 4 prime ministers from 2000 to 2002. Faimalaga Luka, who was elected prime minister in February 2001, was replaced by Koloa Talake in December 2001 after a vote of no confidence. Saufatu Sopoanga became prime minister in August 2002 after general elections were held on 25 July. The elections and appointment of Sopoanga were expected to herald a period of stability in Tuvalu after Ionatana's death.