Beginning in 1983, the fiscal year was changed to start on 1 January instead of 1 March. The consolidated budget includes the general budget of the government (by ministry) and a number of annexed budgets, which pertain to semiautonomous state activities, such as universities. Additionally, each section is divided into operating and investment expenditures. The budget is invariably in deficit.

In early 1994, the budget deficit and high transfers to inefficient state enterprises led to an economic crisis with inflation peaking at 150%. The government replied with an austerity program that succeeded in reducing inflation but sent the economy into recession. The government's commitment to reform waned as the economy began to rebound in 1995. Expenditures again exceeded revenues, forcing the government to incur increasing amounts of expensive debt to fund current expenses and support state enterprises. The Ecevit government restarted structural reforms in 1999 under ongoing programs of standby agreements with the IMF. However, in 2000/01, banking crises, political disputes, and a rapidly growing current account deficit set the economy into a deep downturn that forced the government to adopt a floating exchange rate regime, an ambitious reform program, a tight fiscal policy, additional structural reforms, and unparalleled levels of IMF lending.

The US Central Intelligence Agency (CIA) estimates that in 2001 Turkey's central government took in revenues of approximately $42.4 billion and had expenditures of $69.1 billion. Overall, the government registered a deficit of approximately $26.7 billion. External debt totaled $118.3 billion. 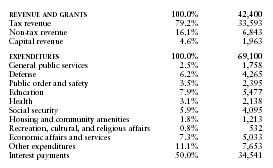