In 2000 and 2001, a trade deficit and a weak banking sector forced Turkey to float the lira, which caused the country to fall into recession. The economy improved in 2002, however, due in part to support from the IMF and tighter fiscal policies. The share of exports of goods and services in GDP rose to 31.5% in 2001, the first time it surpassed 25%. That year, imports of goods and services amounted to 29.2% of GDP. A current account deficit in 2003 was expected to widen to 2.5%–3% of GDP by the end of that year, but was forecast to move into surplus in 2004, due to a devaluation of the currency expected in 2004, and a decline in domestic demand. Total external debt by September 2001 stood at $118.3 billion. In 2002, the IMF approved a three-year $16 billion standby arrangement for Turkey, the fifth review of which, by July 2003, was delayed due to the government's failure to agree with all of the conditions set by the IMF.

The US Central Intelligence Agency (CIA) reports that in 2002 the purchasing power parity of Turkey's exports was $37.6 billion while imports totaled $43.9 billion resulting in a trade deficit of $6.3 billion.

The International Monetary Fund (IMF) reports that in 2001 Turkey had exports of goods totaling $34.4 billion and imports totaling $38.9 billion. The services credit totaled $16.1 billion and debit $6.93 billion. The following table summarizes Turkey's balance of payments as reported by the IMF for 2001 in millions of US dollars. 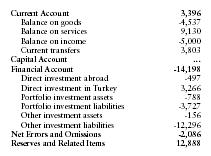