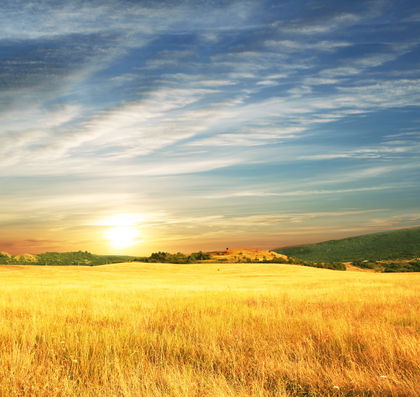 About 29.2 million hectares (64.6 million acres), or 38% of Turkey's total land area, are considered arable; in any given year, about two-thirds of arable land is under crops, and one-third is fallow. Little uncultivated arable land remains. The average holding is not more than four or five hectares (10–12 acres). Dry grain farming—in which half the land must lie fallow each year— offers little more than a subsistence standard of living. About 40% of the labor force is engaged in agriculture, which provided 13% of GDP in 2001. Large farms are concentrated mainly in the Konya, Adana, and Izmir regions. Agricultural methods still tend to be primitive, but modern machinery has been introduced. Much new land has been brought under cultivation since World War II (1939–45), and the increased use of chemical fertilizers and expansion of irrigated lands have increased yields per acre overall. In 1998, about 16% of all arable land was irrigated. Nevertheless, crop yields are still extremely sensitive to variations in rainfall. In good crop years, Turkey exports cereals, but in drought years, it must import them.

Turkish tobacco is world famous for its lightness and mildness. Most of the crop is grown in the Aegean region, but the finest tobacco is grown around Samsun, on the Black Sea coast. Tobacco and tobacco products represented 11% of total agricultural exports in 2001 and 1.4% of all Turkish exports that same year. Some 262,000 tons of tobacco were produced in 1999. Most of the cotton crop is grown around Adana and Izmir. Other crops of commercial importance include olives (1,650,000 tons in 1999), tea (120,000 tons), fruits, nuts, and vegetable oil. Turkey usually leads the world in the production and export of hazelnuts (about 580,000 tons produced in 1999) and ranks after Iran and the United States in pistachio nuts (40,000 tons).

The government stimulates production through crop subsidies, low taxation, price supports, easy farm credit, research and education programs, and the establishment of model farms. The government also controls the conditions under which farm products can move into world markets. For some products, such as grain, the government is the sole exporter. Turkey has recently begun exporting vegetables and fruits abroad, which has affected domestic market prices. Cotton and tobacco production levels are increasing as demands by the textile and cigarette industries have risen.

Turkey is one of seven countries authorized under the 1961 UN Convention on Narcotic Drugs to grow opium poppies for legitimate pharmaceutical purposes. In June 1971, after persistent US complaints that up to 80% of all opiates smuggled into the United States were derived from Turkish poppies, the Turkish government banned poppy growing; however, after efforts to find substitute crops failed, the government decided to rescind the ban on 1 July 1974. Areas authorized for poppy cultivation were estimated at 37,500 hectares (92,700 acres) in 1983; 5,000 hectares (12,350 acres) of opium capsule were sown in 1985. Government steps to curtail illegal cultivation, refining, and export of opiates were reportedly successful; in fact, Turkey has been one of the few opium-growing countries to crack down hard on drug smuggling.

this page is very helpfull, with my social studies project ^_^
2
chrissy

This helped me oodles! Thank you so very much! Ciao!
4
megan

This helped me so much with my world geo project. Thanks
5
samantha

this helped me with my soc. st. project thinxs alot ^_^
6
Geraldine Fenton

Thank you this page is very useful for my son's project at school
7
Ahmad,AL-Anazi

i'm really admirer of the Agriculture of Turkey and it's my favourite subject when i want to make presentation.i'm from saudi arabia.
8
shelby

thx for this page! i have a 100 fact venn diagram to do for social studies. and this helps
11
sherly

thanks for everything i really needed this for my social studies project!!!!! thank you again for ALL your help!!!!!!!!!
12
Mike

Thanks, great article. This is great for the majority of geographical project. Truly your a great person, thanks. =)
13
Raymond

omg, this is a lot of facts for my project. My ss teacher gives use a lot of hw and projects. This website is very helpful!!!
14
Zack

This page helped me greatly with my International Foods project!!
Thanks alot!!!
15
Jump3r321

This is really helping me with my history project! XD
17
joanne

this page helped a lot on my s.s. project thanks! I wish I found this page earlier!
You really helped me!
18
Chancellor

Thank you this was very helpful for my ss project!!
19
Tamara

this has helped me loads with my food tech project thank you!
20
s,collins

what are some farming techniques that turkey uses, i cant find it anywhere??
21
thank you

thank you this page helped me alot with my food technology project.
22
logan

great help on histor project 7th grade thanks again by the way im doing a pamflit thing it boring and i hate school:(
23
amoluck

thank you. this page helped us to establish partners for permaculture training for our staff in the Republic of Turkey
25
Tammy

This was helpful for my sonssocial studies project
26
joan

excellent work. was of importance during my research
27
For you to find out

Thank you so much, this was a great help for my upcoming social studies project. Exactly what i wanted, and explained and written perfectly. Keep it up
28
QUITERLY

thisis very helpful for my world geo class thank you very much.
30
swagbag

Really helped me with my social studies thing. Really explains what Turkey grows in a nice way. Thx
31
rachana

Thank you so much. This was extremely helpful for my history report!
33
Ben

Thank you so much. This was extremely helpful for my history report!
34
Owen

This helped me with my scocil studies project this was extremely helpful.
35
faith

thank you very much.this is help me for my lecture
37
nikos

First of all thank you very much for all the usefull information above! Do you know which regions of turkey deal with the cultivation of aromatic or herbaceous plants like basil, thyme, laurel, oregano, chamomile, sage, spearmint, mint and others? Thank you in advance!
38
Ayelen

this page is so freaking helpful. I wish I get at least a B with the information from this webside.
39
Kaden

This site was very helpful for my social studies project and had very organized information!! THANK YOU!!! :) :)