Only a few utilities—power generation, transportation, and communications—are owned by the government, which is fiscally conservative in what is essentially a free-enterprise system. Following the Asian financial crisis of 1998, the Royal Government of Thailand has taken strong macroeconomic steps to stimulate the economy. However, several years of post-crisis deficit spending by the government in addition to the liabilities incurred in the international bailout program continue to weigh down the economy. The government's annual budget deficit as a percent of GDP was a manageable 1.4% in 1997, and then soared to a peak 5% of GDP in 1998. Although this ratio had declined to 3.3% by 2001 (still above a financially prudent 3% limit), the budget deficit was projected to increase to a near-record 4.8% in 2002. 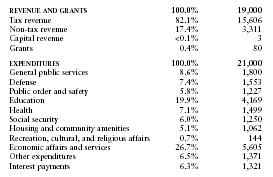