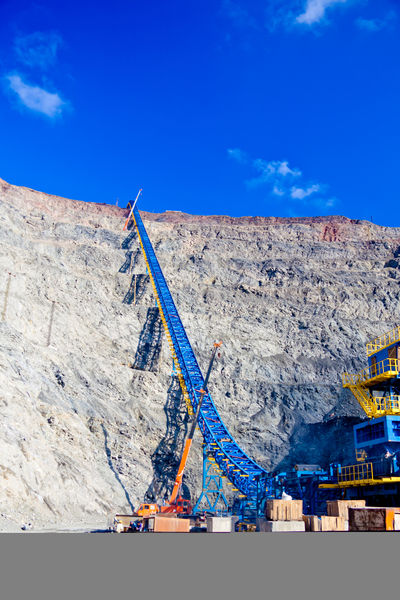 Thailand ranked second in tungsten and third in tin production in 2002, and ranked fifth in feldspar and eighth in gypsum in 2001. The country also had considerable resources of diatomite, dolomite, limestone, potash, rock salt, and a wide variety of other industrial minerals. In 2000, Thailand produced 50 mineral products and had 730 operating mines, of which 34% were limestone quarries; 652 of the sites were industrial mineral mines, 55 were metal mines, and 23 were coal mines. The mining industry employed 19,619, 24% of whom worked in limestone quarrying. Other important minerals were barite, natural gas, gemstones, lead, crude petroleum, silica, and zinc. Most mineral production was for domestic consumption, except for gypsum, and tin and its byproducts (ilmenite, monazite, struverite, tantalum, and zircon), 70% of which were exported. Thailand was a net importer of minerals, mainly because of its large import bills for coal, crude petroleum, iron and steel, primary aluminum, refined copper, gold, refined lead, and silver. Thailand's resources of most metallic minerals and fuel minerals were small. The mining and quarrying sector, which accounted for 2% of GDP in 2000, grew by 7.5% in 2000 and 9.1% in 1999, mainly as a result of a substantial increase in the production of crude petroleum and natural gas. Cement production was a leading industry in 2002.

Among industrial minerals, feldspar output was 542,991 tons, down from 684,983 in 1996; gypsum production was 5.83 million tons, down from 8.56 million tons in 1997—72% of gypsum came from Nakhon Si Thammarat and Surat Thani, and 4.2 million tons were exported, earning $46 million. Hydraulic cement production was 25.5 million tons, down from 37.1 million tons in 1997. Thailand also produced barite, ball clay, kaolin clay, diatomite, metallurgical-grade fluorspar, gemstones (rubies, sapphires, topaz, and zircon), phosphate rock, salt, silica sand (glass), stone (calcite, dolomite, limestone, marble, marl, quartz, and shale), and talc and pyrophyllite. In addition, resources of bentonite and copper have been identified; bentonite has been mined. Exploration in the past five years has focused on copper, gold, and potash. Thailand could soon become an important producer of potash in Asia and the Pacific region—the Somboon deposit was estimated to contain more than 300 million tons of sylvinite ore, with prospects for a 2 million ton per year potash mine, and the Udon deposit was estimated to contain more resources than the Somboon deposit. One copper deposit, at the Puthep project, near Loei, had ore reserves of 42 million tons of heap-leachable ore at a grade of 0.52% copper.

The government's underlying policy has been to conserve the country's mineral resources and to shift the emphasis to exploration, development, and exploitation of minerals consumed domestically, such as ball clay, feldspar, gypsum, kaolin, silica sand, limestone, lignite, phosphate, potash, rock salt, and zinc, and away from minerals that were predominantly exported, such as antimony, barite, fluorite, tantalum-columbium, tin, and tungsten. Thailand's mining industry consisted of a small mining and mineral-processing sector of ferrous and nonferrous metals and a large mining and mineral-processing sector of industrial minerals. All mining and mineral-processing businesses except coal, natural gas, and crude petroleum were owned and operated by private companies.

Information about Potash Mining in Thiland long with the finencial evaluation including Mining Cost, Benification cost, And other Misc. expances.
2
b.beneke

Good day! while on a trip through Thailand recently I collected a smooth, shiny black stone (rock fragment) with a white stripe (calcite?) from one of the islands in the Gulf of Thailand. This seems to be an area of great volcanic activity in long gone past, however the literature says it is limestone country! This rock is very common on the islands which form part of rhe marine national park in the region of Koh Phangan and Ko Samui. I have difficulty in identifying the stone. Could you perhaps help.