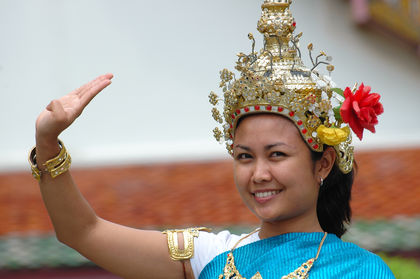 Thailand contains more than 30 ethnic groups varying in history, language, religion, appearance, and patterns of livelihood. However, the Thai, akin to the Lao of Laos, the Shan of Myanmar (Burma prior to June 1989), and the Thai groupings of southern China, comprise about 75% of the total population of Thailand. The Thai may be divided into three major groups and three minor groups. Major groups are the Central Thai (Siamese) of the Central Valley; the Eastern Thai (Lao) of the Northeast (Khorat); the Northern Thai (Lao) of North Thailand; and the Southern Thain (Chao Pak Thai) of peninsular Thailand. Minor groups are the Phuthai of northeastern Khorat, the Shan of the far northwestern corner of northern Thailand, and the Lue in the northeastern section of northern Thailand. The several branches of Thai are united by a common language.

A major ethnic minority is the Chinese (about 14%), engaged in business and commerce throughout the country. Other varied ethnic groups account for the remaining 11% of the population. Malays (3–4%), in the southern peninsula near the border and, to a lesser extent, along the southeast coast; Khmers (1%), all along the Cambodian border from the Mekong to the Gulf of Thailand; and Vietnamese or Annamese, in the southern Khorat and on the southeast coast. Small numbers of residents from India, Europe, and the United States live mainly in urban areas. Principal tribal groups, mainly hill peoples, include the Kui and Kaleung, in the northeast; the Mons, living mainly on the peninsula along the Burmese border; and the Karens, living along the northern Burmese border. There are, in addition, some 20 other minority groups, including the Akha, Musso, Meo, Kamuk, Tin, Lawa, and So; most of these peoples, primitive and small in number, live by shifting cultivation in rugged, isolated mountain or dense forest terrain.

Thx!! This website really helped with my Geography/Culture class!! I will make sure to recommend it to my teacher!!
3
April

This was really helpful only in 9th grade using this for my final project if i can understand it anyone can!
4
Jordyn

Thanks for this info!! It really helped me with my reading class project.