In 1996, a weakening economy and a decline in export growth created a current account deficit that amounted to 8% of GDP. Simultaneously, high interest rates and a currency tied to the dollar attracted money to an economy without sufficient productive assets to support the inflow. The government was forced to pursue a high interest-rate policy to protect the currency. When the cost of doing so got too high, the government let the currency float against the dollar, which resulted in a 20% devaluation. By mid-1997, Thailand's short-term debt obligations had reached $23.4 billion, consuming three-quarters of its foreign reserve holdings. In August of 1997, Thailand agreed to an economic restructuring package with the IMF that included $10– 20 billion in standby credits. The GDP contracted by 10.8% in 1998, compared with an average growth rate of 8.5% from 1990 to 1996. The economy since the 1997–98 crisis subsequently rebounded, and strong export performance drove economic growth in 1999–2000. Nevertheless, structural reform was still needed, especially in agriculture, education, and small- and medium-sized businesses. Growth declined in 2001, due in part to the global economic downturn, a downturn in export demand, a slow pace of corporate debt restructuring, and a struggling financial sector. Severe Acute Respiratory Syndrome (SARS) negatively impacted trade and travel in 2003. Export and investment growth was expected to increase in 2004, which was expected to lead to an increase in import demand, and thus a slight slowdown in growth.

The US Central Intelligence Agency (CIA) reports that in 2001 the purchasing power parity of Thailand's exports was $65.3 billion while imports totaled $62.3 billion resulting in a trade surplus of $3 billion.

The International Monetary Fund (IMF) reports that in 2001 Thailand had exports of goods totaling $63.2 billion and imports totaling $54.6 billion. The services credit totaled $13 billion and debit $14.6 billion. The following table summarizes Thailand's balance of payments as reported by the IMF for 2001 in millions of US dollars. 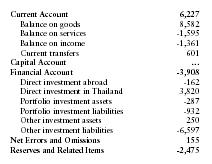