Revenues from domestic taxes and resources are limited. Expenditures are largely for grain, the supply of fuel and raw materials for industry, and to maintain the military. Despite proposals to liberalize the economy, the government continues to subsidize inefficient state enterprises. Only 11% of medium and large enterprises were privatized as of 1997, but the continuance of privatization has gained momentum. In December 1999, the government announced that all small enterprises had been privatized, and that privatization of medium and large enterprises was a high priority.

The US Central Intelligence Agency (CIA) estimates that in 2000 Tajikistan's central government took in revenues of approximately $146 million and had expenditures of $196 million. Overall, the government registered a deficit of approximately $50 million. External debt totaled $1.23 billion. 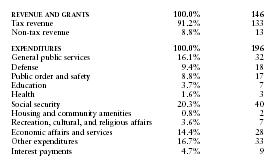