At last estimate, Taiwan had 1,108 km (688 mi) of railroad track in common carrier service, and several thousand kilometers of narrow gauge track dedicated to industrial use. The main trunk line, now electrified, links the main cities of the populous west coast between Chilung and Kaohsiung. A second trunk line, the North Link between T'aipei and Hualien on the east coast, was completed in 1979. It connects with an eastern line between Hualien and T'aitung, which was modernized in the early 1980s. Construction of the 98-km (61 mi) South Link (between T'aitung and P'ingtung) has been completed. Forming the last link in the round-the-island rail system, the South Link opened on 6 December 1991, taking over 11 years and $770 million to complete. Construction of a US $6.5 billion rapid-transit system was just starting in T'aipei in 1989.

Taiwan has five international seaports, all of them extensively modernized in the 1970s. Kaohsiung in the southwest is by far the largest, handling about two-thirds of all imports and exports. Other major ports are Chilung, on the north coast; Hualien and Suao, both on the east coast; and T'aichung, on the west coast. As of 2002, Taiwan's merchant marine consisted of 152 vessels totaling 4,262,451 GRT.

Also in 2001, there were 39 airports, of which 37 had paved runways. There are two international airports. The main one, opened in 1979, is Chiang Kai-shek International Airport, at T'aoyüan, southwest of T'aipei; the other serves Kaohsiung. T'aipei Airport handles only domestic flights. Regular domestic flights also reach Hualien, T'aitung, Chiai, T'ainan, and several other cities. Principal air service is provided by China Air Lines, Taiwan's international airline, and other international carriers, and by Taiwan's leading domestic airline, Far Eastern Air Transport. 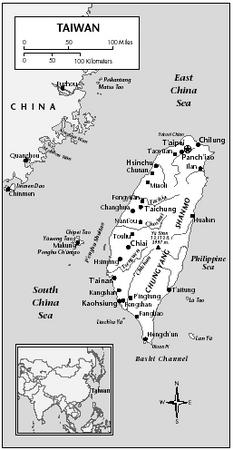