Sri Lanka's balance-of-payments position is highly sensitive to price changes in the world market because it depends in large part upon a few export crops to pay for its imports. Since 1983, sharply rising defense expenditures, a decline in tourism caused by continuing civil violence, and slumping world tea and coconut prices combined to exert pressure on the balance of payments. The deficit has also been partially offset by substantial foreign exchange earnings from tourism and from remittances by Sri Lankans working abroad. The current account deficit has declined each year since 1994 when it stood at $860 million. Export growth in 1999, however, slowed considerably to 2% and earnings from tea exports had declined 40% due to the impact of the Russian economic crises in 1998.

In 2000, exports increased by close to 20% to $5.5 billion, and exports of garments and tea did very well. Other exports, such as food, rubber products, machinery, and processed diamond exports, also performed well that year. Sri Lanka floated the rupee in 2001, and the central bank began employing currency controls. Since then, the controls were relaxed. In addition, the government imposed an import duty surcharge to stem the flow of imports. The country's external debt stood at $9.9 billion at the end of 2000, equal to 60% of GDP.

The US Central Intelligence Agency (CIA) reports that in 2001 the purchasing power parity of Sri Lanka's exports was $4.9 billion while imports totaled $6 billion resulting in a trade deficit of $1.1 billion.

The International Monetary Fund (IMF) reports that in 2001 Sri Lanka had exports of goods totaling $4.82 billion and imports totaling $5.38 billion. The services credit totaled $1.37 billion and debit $1.76 billion. The following table summarizes Sri Lanka's balance of payments as reported by the IMF for 2001 in millions of US dollars. 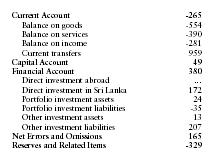 can i have more information on this.this really helps us on our studies.
3
Asiri

Can i have balance of payment current trends, or what are the impact on BOP in Recent financial crisis
5
Iresha

Please explain and e-mail me on below 3 points.

2.What are the strategies devised by Sri Lanka to tackle the deficit in Current Account

This is commendable. Doubt whether this situation could be sustained.