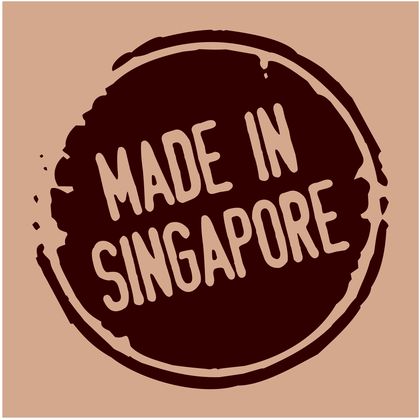 Historically, Singapore's economy was based primarily on its role as an entrepôt for neighboring countries due to its strategic geographic location at the entrance to the Straits of Malacca. It did not have minerals or other primary products of its own to export, but it served a major economic function by processing and transshipping the goods of nearby lands. Its most significant natural resource is a deep water harbor. As a result of these circumstances, Singapore became highly active in shipbuilding and repair, tin smelting, and rubber and copra milling. Until about 1960, however, its economy was frequently shaken by major fluctuations in its export earnings (particularly from rubber and tin) as a consequence of often adverse commodity and price trends. Since the early 1960s, Singapore has attempted to break away from this economic pattern. Its government embarked on an ambitious and largely successful program of promoting industrial investment (both from abroad and locally), developing industrial estates, and providing industrial financing and technical services.

By the early 1980s, Singapore had built a much stronger and diversified economy, which gave it an economic importance in Southeast Asia out of proportion to its small size. Government plans during the first half of the 1980s called for realigning industrial activities from traditional labor-intensive, low-wage activities to capital-intensive, high-wage and high-technology activities, notably the electronic industries and oil refining. In 1985, however, Singapore's economy declined for the first time in 20 years. One of the reasons for the decline was high wages, which made Singaporean products less competitive on the world market. Other reasons for the economic downturn included a slumping demand for oil and electronic products and the economic woes of Malaysia, Indonesia, and other important trading partners.

By the late 1980s, Singapore had begun to further diversify its economy, making it capable of providing manufacturing, financial, and communications facilities for multinational firms. In the late 1980s one of the fastest growing sectors of Singapore's economy was international banking and finance, accounting for some 25% of GDP. It ranked behind Tokyo and Hong Kong amongst financial service centers in the Southeast Asia region. In 1989 earnings from manufacturing accounted for 30% of GDP.

In the 1990s productivity increased as did labor costs. Export growth in high-technology manufactured goods signaled Singapore's success in shifting to higher value-added production. The electronics industry accounted for the largest share of value-added in manufacturing. Manufacturing was dominated by the production of computer peripherals and oil processing. Between 1992 and 1995, property prices double, reaching their peak in 1996. In the five years 1993 to 1997, GDP growth averaged8.84%. In June 1997, Hong Kong reverted to Chinese rule, triggering the Asian financial crisis. In Singapore, GDP growth dropped to 1.5% in 1998 and residential property prices fell 40%. Singapore's sensitivity to the external economic environment, with trade running 300% of GDP, is extreme. Nevertheless, Singapore weathered the crisis without a contraction, and in 1999 growth had recovered to 5.4%. Driven by the world-wide boom in IT demand and robust recoveries in domestic consumption and investment, GDP growth soared to9.9% in 2000. However, the dot.com bust in 2001 to the economy's first yearly contraction since 1985, of 2%. Recovery began in the second quarter of 2002, and though weak because continued low export demand, growth was a positive 2.2% for the year. Projections for 2003 are for only a 4.8% growth.

Other constraints on Singapore's economic performance are labor shortages, rising labor costs, and the declines of productivity—although in by the second and third quarter of 2002, gains in productivity were averaging 6.1% compared to decreases averaging 7.75% in the last half of 2001. Singapore maintains one of the most liberal trading regimes in the world, and has regularly been ranked one of the least corrupt and most competitive countries. The government is a major and active player in the economy, owning substantial productive assets (land and capital). The government directs and targets the economy through laws, regulations and incentives, and participates in business ventures through Singapore's unique hybrid, the government-linked company (GLC). Monetary discipline hold inflation tightly in check, with consumer prices show mild deflation (-0.4% to -0.9%) in 2002. Unemployment rose to 4.7% in 2001, and remained above 4% throughout 2002, a high level for Singapore. Per capita income estimate by the CIA in purchasing power parity terms was $24,700, one of the highest in the world.