Archaeological evidence on Upolu indicates that Samoa was colonized by maritime traders of the Lapita culture at least as early as the 1st millennium BC . From the mid-13th century AD , genealogies, important titles, traditions, and legends give considerable information on the main political events. The first Europeans to sight the islands were the Dutch explorer Jacob Roggeveen in 1722 and the French navigator Louis de Bougainville in 1768. But the world knew little about Samoa until after the arrival of the missionary John Williams in 1830 and the establishment of the London Missionary Society.

Williams' arrival coincided with the victory of one group of chiefs over another, ending a series of violent internecine wars. Runaway sailors and other Europeans had already settled among the Samoans and had assisted the chiefs in their campaigns. Whalers also visited the islands, and from time to time the warships of great powers visited Apia to oversee the activities of whaling crews and settlers. Naval officers and missionaries both began to consult with the dominant group of chiefs as if it represented a national government and to treat its leader as a king. In time, semiofficial representatives of Great Britain and the United States were stationed in Apia. Between 1847 and 1861, the United States appointed a commercial agent, and Britain and the city of Hamburg appointed consuls.

Factional rivalries took a new turn as British, US, and German consular agents, aided sometimes by their countries' warships, aligned themselves with various paramount chiefs. Intrigues among the chiefs and jealousies among the representatives of the great powers culminated in civil war in 1889. In the Berlin Treaty, which followed, Britain, the United States, and Germany set up a neutral and independent government under King Malietoa Laupepea, and their consuls were authorized to constitute Apia as a separate municipality. The death of King Malietoa in 1898 led to a dispute over the succession, and the three powers intervened once again. In 1899, they abolished the kingship, and in 1900, they signed a series of conventions that made Samoa a German protectorate. The German administration continued to experience difficulties, leading to the exile of several Samoan leaders and the suspension of others from office. With the outbreak of World War I in 1914, New Zealand military forces occupied Samoa, and from 1919 to 1946, New Zealand administered the islands as a mandate of the League of Nations.

In 1927, local opposition to the New Zealand administration among both the Samoan and the European communities resulted in the formation of a nationalistic organization known as the Mau, which embarked on a program of civil disobedience. Its members withdrew from political life, from schools, and from all 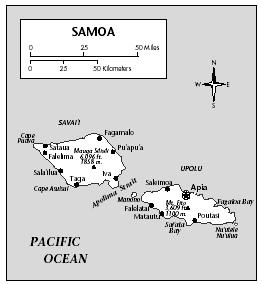 contact with the government. The protests lasted in one form or another until 1936, when the leaders of the Mau reached an agreement with the administration and reentered the political life of the territory.

In 1946, a trusteeship agreement was approved by the UN General Assembly, and New Zealand formally committed itself to promote the development of Samoa toward ultimate self-government. The passage of the Samoa Amendment Act of 1947 and a series of further amendments governed Samoa's subsequent evolution toward independence. An executive council was reconstituted in 1957, and the New Zealand high commissioner withdrew from the Legislative Assembly, which thenceforth was presided over by an elected speaker. In 1959, an executive cabinet was introduced, and in 1960, the constitution of the Independent State of Samoa was adopted. This was followed by a plebiscite under UN supervision in 1961 in which an overwhelming majority of voters approved the adoption of the constitution and supported independence.

On 1 January 1962, Samoa became an independent nation under the name of Western Samoa. Tupua Tamasese Meaoli and Malietoa Tanumafili II became joint heads of state. When the former died on 5 April 1963, the latter became the sole head of state. Fiame Faumuina Mataafa was independent Western Samoa's first prime minister (1962–70) and served again in that post from 1973 until his death in 1975.

During the late 1970s and early 1980s, Western Samoa suffered from a worsening economy and growing political and social unrest. A divisive public-sector strike from 6 April to 2 July 1981 cut many essential services to a critical level. The leadership of Tupuola Taisi Efi, who later became head of the Christian Democratic Party and was prime minister from 1976, was successfully challenged by the Human Rights Protection Party (HRPP), which won the February 1982 general election. Judicial rulings subsequently nullified some of the election results, and Tupuola returned to power from September to December. On 30 December 1982, however, a second HRPP government was formed, with Tofilau Eti as prime minister. Controversy erupted in 1982 over the signing by the HRPP government in August of a protocol with New Zealand that reduced substantially the right of Western Samoans to New Zealand citizenship. Tofilau resigned in December 1985, and Va'ai Kolone became prime minister in January 1986 as head of a new coalition government comprised of 15 CDP members and 12 former HRPP members. Tupuola was named deputy prime minister of the new government. In April 1988, Tofilau Eti was again appointed prime minister and approved by the legislative assembly.

In 1991, Western Samoa held its first elections under an arrangement of universal suffrage that was instituted after a national referendum passed in 1990. In that election, the HRPP won 28 of 47 seats and Tofilau once again became prime minister. In elections held 26 April 1996, Tofilau Eti retained his post as prime minister.

In July 1997, the country officially changed its name from Western Samoa to Samoa following a June affirmative vote by the legislative assembly. Tofilau Eti resigned due to poor health in November 1998 and died in March 1999 at the age of 74. He was succeeded by deputy prime minister, Tuila'epa Sailelel Malielegaoi. In elections held 2 March 2001, Tuila'epa retained his post as prime minister, with the HRPP taking 23 seats in the Fono. The Supreme Court ordered four by-elections, which were won by the HRPP, bringing its total to 30 of 49 parliamentary seats. The HRPP formed a government with the support of several independent members of parliament.

In June 2002, New Zealand Prime Minister Helen Clark issued an apology to Samoans for injustices inflicted upon them during colonial times. During the time when New Zealand ruled the country (from 1919 to 1962), 22% of the population died as the result of an influenza virus introduced to the islands, and in 1929, New Zealand police fired upon and killed 9 people during a rally for independence.