In the early 1970s, Samoa's heavy trade deficits were largely offset by tourist revenues, remittances from Samoans working abroad, and long-term investment capital. By the early 1980s, however, rising import costs and declining export earnings led to a critical balance-of-payments situation. By 1992, the external account deficit (excluding grants) had increased to about 28% of GDP. Samoa's external debt stood at $192 million in 1999.

The US Central Intelligence Agency (CIA) reports that in 2000 the purchasing power parity of Samoa's exports was $17 million while imports totaled $90 million resulting in a trade deficit of $73 million.

The International Monetary Fund (IMF) reports that in 1999 Samoa had exports of goods totaling $20 million and imports totaling $116 million. The services credit totaled $61 million and debit $25 million. The following table summarizes Samoa's balance of payments as reported by the IMF for 1999 in millions of US dollars. 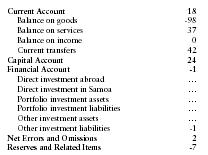