About 85% of the people of Sa'udi Arabia are Sunni Muslims. The dominant form of Islam is Wahhabism, a fundamentalist Muslim reform movement first preached by the 18th-century religious leader Muhammad bin 'Abd al-Wahhab. Most other Sa'udis up to 15% are Shi'i Muslims. The holy city of Mecca is the center of Islam and the site of the sacred Ka'bah sanctuary, toward which all Muslims face at prayer. A pilgrimage to Mecca is one of the five basic obligations of Islam and is incumbent on every Muslim who is physically and financially able to perform it.

There are several thousand foreign Christian employees— Arab, US, and European. Jews have not been allowed to enter the country since the establishment of the state of Israel in 1948 except under special circumstances.

Islam is the state religion and all citizens must be Muslims. The government claims that the Holy Koran and the Sunna (tradition) of the Prophet are the country's constitution. The public worship of non-Muslim faiths is prohibited. While non-Muslim foreigners are theoretically permitted to worship privately, the guidelines 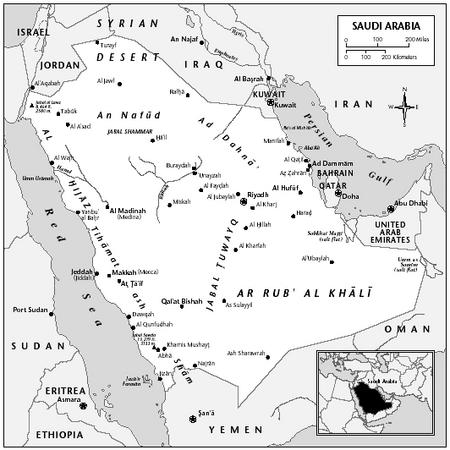 which designate between public and private worship are ambiguous.