The US Central Intelligence Agency (CIA) reports that in 2001 the purchasing power parity of Sa'udi Arabia's exports was $66.9 billion while imports totaled $29.7 billion resulting in a trade surplus of $37.2 billion. 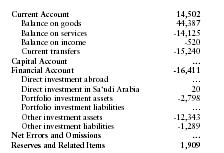