The principal sources of revenue are income taxes, taxes on sales and business operations, and excise duties. Infrastructural improvements, defense expenditures, and debt service continue to lead among the categories of outlays.

The government's commitment to fiscal balance resulted in a budget surplus for the first time in two decades in 1994. The surplus was achieved by higher taxes, privatization receipts, and expenditure cuts. The Philippines was not affected as severely by the Asian financial crisis of 1998 as many of its overseas neighbors, as a result of over $7 billion in remittances annually by workers overseas. 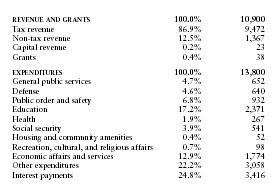