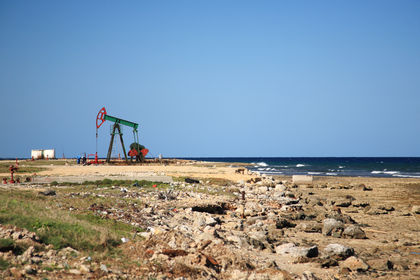 The mining and quarrying sector continued to decline in importance, accounting for 1% of GDP in 2000 and employing1.5% of the labor force. Production for much of the last quarter of the 20th century was slowed by political instability, declining foreign investment, low international prices, high operation and production costs, labor problems, an inadequate mining law, and natural disasters such as earthquakes, volcanic eruptions, landslides, tsunamis, typhoons, floods, and drought. Nevertheless, the Philippines ranked second in the Asia-Pacific region, after Indonesia, in terms of mineral prospectivity and resources. Mining for metals accounted for 44% of the industry's production value and nearly 100% of mineral export earnings; Japan was the primary market, copper and gold were the principal commodities, and the mining industry generated $1 billion in 2000. The Philippines reportedly had the world's largest source of refractory chromite, from Masinloc, and substantial resources of copper, gold, nickel, and silver. The production of chemicals and petroleum refining were leading industries in 2002.

Copper, from northern Luzon, Cebu, Negros, Marinduque, and Mindanao, was the leading mineral; 26,300 tons (metal content) was produced in 2000, down from 37,600 in 1999, 48,600 in 1997, and 61,600 in 1996. Gold output, from northern Luzon, Mindanao, Masbate, and the Negros islands, was 36,513 kg; and nickel, from Surigao and Palawan, Hinatuan, and the Dinagat islands, 23,000 tons, up from 8,450 in 1999 and 18,137 in 1997. The Nonoc nickel laterite project was to be redeveloped, with a new industrial partner; the project had a resource of 144 million tons with an average grade of 1.1% nickel and 0.11% cobalt, and projections for the 40-year life of the mine envisioned output of 41,000 tons per year of Class I nickel and 4,000 tons per year of high-purity cobalt. The Philippines also produced sizable quantities of metallurgic chromite, from western Luzon; chromite ore production totaled 20,900 tons (gross weight), down from 53,871 in 1998, 87,500 in 1997, and 107,068 in 1996, although Benguet Corp.'s Masinloc open-cut mine had a capacity of 105,000 tons per year. Silver was also produced for export. The industrial mineral sector was dominated by the production of limestone, marble, and sand and gravel. In 2000, the Philippines also produced platinum-group metals (as a byproduct), bentonite, hydraulic cement, clays (including red and white), feldspar, lime, magnesite, perlite, phosphate rock, pyrite and pyrrhotite (including cuprous), marine salt, silica sand, stone (including dolomite, volcanic cinder, tuff, quartz), and sulfur. No guano phosphate was produced in 1999 and 2000.

Exploitation of the Philippines' potentially rich mineral resources has been stimulated somewhat by the Mining Act of 1995, which was designed to promote the mining industry to the international community and to provide incentives to ensure efficiency and economic viability for mining endeavors. The law also aimed to help the domestic mining industry regain its competitiveness by allowing companies (contractors) to obtain an exploration permit for a specific area for up to four years. For a viable deposit, the code provided four production agreements— production sharing, co-production, joint-venture, or financial/technical assistance—with a duration of up to 50 years. A serious accident in 1996 involving spilled mine tailings from a copper mine on Marinduque led the government to freeze almost all applications for exploration licenses by foreign companies for one year. Through 2000, 59 exploration permits had been issued, and more than 400 applications were pending. The mining industry employed 400,000 people—300,000 of them engaged in small-scale mining and panning activities, chiefly in artisanal gold workings.

This info. is 11 years old. Can you provide more current data?

Cod you provide me with latest updates of this info.
3
gabby