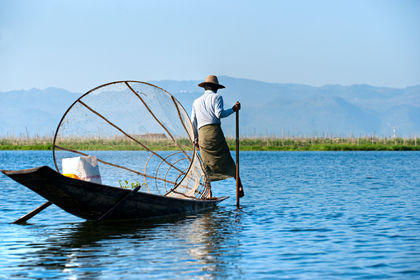 Fish is the primary source of protein in the Filipino diet. Some 2,000 species abound in Philippine waters. Despite more than a doubling in output since the 1960s, the fishing industry remains relatively undeveloped, and large quantities of fish are imported. The Bureau of Fisheries and Aquatic Resources (BFAR) cites the continued environmental degradation of Philippine waters as a major constraint on fish production. In 2000, the total domestic fish catch was 1,892,832 tons (12th in the world), of which 8% came from inland waters. Exports of fish products in 2000 were valued at $400 million.

Six species are most important, according to BFAR, because each has yielded 100,000 tons per year or more since the mid- 1980s. These species are: sardines, roundscad, frigate tuna, anchovies, milkfish, and tilapia. Indian mackerel, skipjack and yellowfin tuna, sea bass, red snapper, mullet, kawakawa, squid, and prawn are also plentiful. Principal commercial fishing grounds are off Palawan, north of Panay and Negros, and to the south and west of Mindanao. Subsistence fishing is conducted throughout the archipelago. Fish ponds, chiefly for cultivation of bangos or milkfish, are principally in the swampy coastal areas of western Panay and around Manila Bay. Pearl shells (including cultured pearls), sponges, sea cucumbers (trepang), shark fins, and sea turtles are exported.

This is cool. I like the detail put in the article. It shows lots of information. I think it is just magnificient!!!!!!!!!
2
kathleen


wish more info, because i need it in my assignment in our class,civics.
3
hamsa mohiden

your information regarding fish industry is interesting and educational.
4
shanny

the article is nice... can i ask for an article defining the term small scale fisherfolk? as well as the exploitation that is existing in the coastal waters of the philippines? thanks..
6
kath

,,the article help me so much in my project,,a documentary project in economics,.tnx to this info..it's a big help..:-)
7
rizza

thank you for this useful informations,,it helped a lot..
8
john

thank you for saporting and helping others for there work. :)
9
Leidi Laarni M. Layco

I AM SEARCHING FOR THIS ARTICLE DAYS BEFORE AND NOW I FOUND IT!

A BIG HELP FOR MY PROJECT!

It is nice article. It helped a lot of my assignment. Thank you for the information!
11
Ian Derf C. Salvana

Nice! The article is fantastic for my report! Thank you!
12
kenn zymer baldos

short and concise..!!!
this is good..!!this is really helpful to us..thank you!:)
14
Jessica Marie Villadolid Cordova

Thank you so much for the information . I gain new knowledge about FISHERIES . It helps me a lot because I am a BS FISHERIES student.