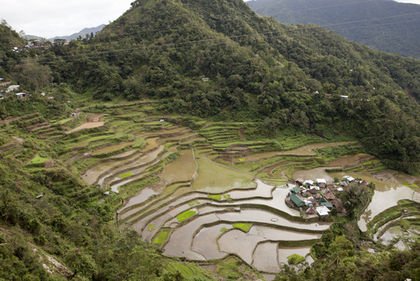 Primary responsibility for environmental protection rests with the National Pollution Control Commission (NPCC), under whose jurisdiction the National Environmental Protection Council (NEPC) serves to develop national environmental policies and the Environmental Center of the Philippines implements such policies at the regional and local levels. Uncontrolled deforestation in watershed areas, with consequent soil erosion and silting of dams and rivers, constitutes a major environmental problem, together with rising levels of air and water pollution in Manila and other urban areas. The NPCC has established standards limiting automobile emissions but has lagged in regulating industrial air and water pollution. In 1996, industrial carbon dioxide emissions totaled 63.2 million metric tons. The nation's cities create an average of 5.4 million tons of solid waste per year and 38 of the country's rivers contain high levels of toxic contaminants.

The nation has 479 cu km of renewable water resources, with 88% used to support farming and 4% used for industrial activity. Only 79% of the rural population has access to safe drinking water. Pollution has also damaged the coastal mangrove swamps, which serve as important fish breeding grounds. Between the 1920s and 1990s, the Philippines lost 70% of its mangrove area. About 50% of its coral reefs are rated dead or dying as a result of pollution and dynamiting by fishermen. The nation is also vulnerable to typhoons, earthquakes, floods, and volcanic activity.

The Government should focus on environment protection program, especially in areas where there are no trees and wildlife which has a great contribution to in saving the earth.