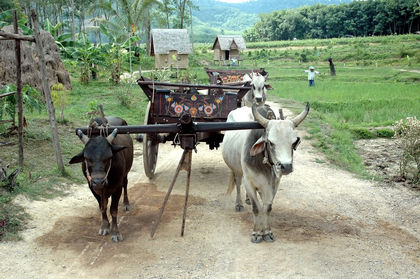 Beginning in 1972, the main tenets of the Marcos government's economic policies, as articulated through the National Economic Development Authority, included substantial development of infrastructure, particularly through the use of labor-intensive rather than capital-intensive (i.e., mechanized) methods, and a shift in export emphasis from raw materials to finished and semifinished commodities. The policies of the Aquino administration have stressed labor-intensive, small and medium- scale agricultural projects and extensive land reform. In addition, wealth believed to have been amassed by President Marcos was actively being pursued all over the world. Long-range planning has followed a series of economic plans, most of them covering five-year periods. The development program for 1967–70 aimed to increase the growth rate of per capita income from the 0.9% level in 1961–65 to 2.4%; to increase national income by 5.7% per year during the plan period, and to reduce the unemployment rate from 13% (1965) to 7.2% (1970). The government invested $3.5 billion in integrating the traditional and modern sectors of the economy. Marcos's first long-range plan following the 1972 declaration of martial law was a four-year (1974–77) infrastructure development program calling for 35% to be expended on transportation, 33% on energy and power, 20% on water resources, 10% on education, health, and welfare, and 2% on telecommunications. A 1974–78 plan, announced in late 1975, envisioned energy as the major focus of the new plan, with 34% of expenditures, followed by transportation, 30%; water resources, 23%; social programs, 7%; and other sectors, 6%. The goals of the 1978– 82 plan included an 8% annual growth in GNP, rural development, tax incentives for export-oriented industries, continued self-sufficiency in grain crops despite rapid population growth, and accelerated development of highways, irrigation, and other infrastructure. The 1983–87 plan called for an annual expansion of 6.2% in GNP, improvement of the rural economy and living standards, and amelioration of hunger.

Under the Aquino administration the goals of the 1987–92 plan were self-sufficiency in food production, decentralization of power and decision making, job creation, and rural development. Economic performance for real growth fell far short of plan targets by 25% or more. Structural changes to provide a better investment climate were carried out. The Foreign Investment Act of 1991 liberalized the environment for foreign investment. An executive order issued in July 1991 reduced the number of tariff levels over five years and reduced the maximum duty rate from 50% to 30%. Quantitative restrictions were removed from all but a few products. The foreign exchange market was fully deregulated in 1992.

A new six-year medium-term development plan for 1993–98 was presented by the government in May 1993. The plan stressed people empowerment and international competitiveness within the framework of sustainable development. To do this, the government planned to disperse industries to regions outside the metropolitan Manila area. The plan also called for technological upgrading of production sectors, poverty alleviation, and human/social development. Over the six year period, agriculture's share of GDP was expected to decline from 23% to 19% of GDP while industry's share was to increase from 34% to 39%. The Medium- Term Philippine Development Plan (MTPDP) for 1999 through 2004 focused on rural development, especially on the modernization of the agricultural sector. The MTPDP targeted agricultural growth from 2.6% to 3.4% during the plan's time- frame, as well as growth in the industrial and service sectors. The Philippines finished three years of IMF supervision in March 1998, only to be hit by the Asian financial crisis. Financial assistance continued in 1998 and 1999 through the Asian Development Bank, World Bank, and Japan's Overseas Economic Cooperation Development Fund.

nice!!! this really helps my assignment for today! thank you for this I hope you put many many moree
2
leonard

thanks for the information, it helps me a lot in my assignment,more power
3
1234

nice, this helps me alot on my assignment about power... and it helped me understand it more.
4
jae asutilla

it gives me idea in our paper works thank you. but where's the name of author?
5
justin jhake

nice, this helps me alot on my assignment about power... and it helped me understand it more.
6
cindy

thanks ..a lot coz it's help me to make my assignment easy..
7
Joshua

nice it helps my project GOD BLESS :D thanks a Lot i understand more !
8
gg

thank you so much for the infos.. it helped a lot..
9
Shemitche

Thanks for the information it really helps me to understand more regarding to economic development.
I hope that time will come there will be no corrupt governance.
10
i love my mom Mitch

Thank you so much for the info..it helps me to ponder things that is happening to our country.