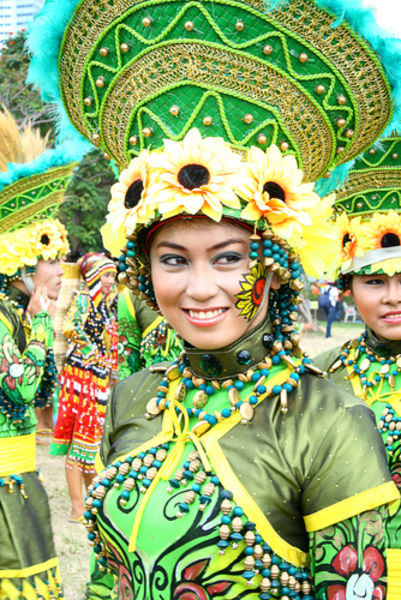 Since World War II, the Philippines experienced frequent trade deficits, aggravated by inflationary pressures. Deficits were counterbalanced by US government expenditures, transfer of payments from abroad, official loans (US Export-Import Bank, IBRD, and private US banks), net inflow of private investment, tourist receipts, remittances from Filipino workers overseas, and contributions from the IMF.

In 1996, trade liberalization policies helped to push imports up by 22% while exports rose by only 18%. The result was a widening trade deficit that amounted to 13% of GDP. Foreign investment in the stock market and remittances from overseas workers helped to offset the deficit and avert a balance-ofpayments crisis. In 1998, the Philippines recorded a trade surplus at about 2% of GNP in the current account due to high electronics exports and low imports due to the devaluation of the peso. This was the first surplus in 12 years.

Merchandise exports, in double digits through most of the 1990s, slowed to a single-digit growth pace in 2000, reflecting fewer export receipts from electronics and telecommunications parts and equipment. This decline was attributed by the electronics industry to weaker prices for maturing products and technologies, and to the decline in electronic industry investments from the 1994–97 boom years (when investment averaged $1.5 billion a year).

Traditionally, exports of primary products failed to balance imports, leading the government to restrict imports. Structural change accelerated in the 1970s, as the contribution of industry (including construction) to GDP rose from 29.5% in 1970 to 36.5% by 1980, primarily as a result of export-oriented industrialization promoted by the Marcos government. The Aquino assassination in August 1983 had immediate economic consequences for the Marcos government, as did the broader Third World Debt Crisis. Hundreds of millions of dollars in private capital fled the Philippines, leaving the country with insufficient foreign exchange reserves to meet its payments obligations. The government turned to the IMF and its creditor banks for assistance in rescheduling the nation's foreign debt, and an austerity program was set up during 1984–85. In December 1986, under IMF guidance, the Aquino government launched a privatization program with the establishment of the Assets Privatization Trust (APT). Monopolies established under the Marcos administration in coconuts, sugar, meat, grains, and fertilizer were dismantled and a ban on copra exports was lifted. All export taxes were abolished; and the government allowed free access to lower-cost or higher-quality imports as a means of improving the cost-competitiveness of domestic producers.

Many difficulties remained, however. The prices of commodity exports, such as sugar, copper, and coconut products, were still weak, while demand for nontraditional manufactured products, such as clothing and electronic components, failed to rise. The structural reforms produced an initial recovery between 1986 and 1989, but this was arrested by the series of natural disasters in 1990–1991. In 1986, Aquino had also embarked on a Comprehensive Agrarian Reform Programme, but its goals remain unfulfilled.

In the 1990s, the government concluded three additional financial arrangements with the IMF—a stand-by agreement signed 20 February 1991 for about $240 million (all drawn); an arrangement under the Extended Fund Facility (EFF) signed 24 June 1994 for about $554 million (all drawn), and a stand-by agreement signed 1 April 1998 for about $715 million (76.7% drawn down as of 31 December 2002). At the end of 2002, the Philippines owed over 140% of its quota to the Fund. Scheduled debt repayments to the IMF for 2003 are about $330 million, and outstanding loans and purchases are not due to be retired until at least 2007. The country also had five debt reschedulings in the period 1984 to 1991 with the Paris Club—for official debt owed to aid donor countries—on which some payments are still owing. In January 2003, the Trade and Development Department announced at least a partial retreat from its 15 years of trade and investment liberalization, stating that it plans to bring tariff rates to the maximum allowed by the WTO for industrial imports, particularly petroleum imports, and for products produced in the Philippines. This would entail raising some duties that had previously been lowered. Exempted would be imports needed by its local manufacturers. Industrialization of the economy, and, therefore a major improvement in the country's terms of trade, remains elusive.

The US Central Intelligence Agency (CIA) reports that in 2000 the purchasing power parity of the Philippines's exports was $37 billion while imports totaled $30 billion resulting in a trade surplus of $7 billion.

The International Monetary Fund (IMF) reports that in 2001 the Philippines had exports of goods totaling $31.2 billion and imports totaling $28.5 billion. The services credit totaled $3.15 billion and debit $5.09 billion. The following table summarizes the Philippines's balance of payments as reported by the IMF for 2001 in millions of US dollars. 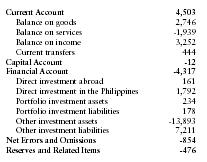