In 1994, in response to a decade of economic reforms that have opened the economy to foreign investment and triggered strong economic growth, the budget produced a surplus for the first time in 50 years. In 1995, public debt service dropped to 1.9% of GDP and 12% of expenditures. External debt accounted for 23% of total government debt. Interest on external debt equaled 3.5% of exports of goods and services plus investment income. The surpluses continued in 1996, but showed signs of weakness in 1997 as forecasts of slower economic growth and uncertainty over the intentions of the newly elected government prompted a drop in business confidence. Nevertheless, in June of 1997, the new government proposed a three-year program of increased spending on social programs and postponed a round of promised tax cuts. As a result of privatization and restructuring, New Zealand now has one of the most open economies in the world. 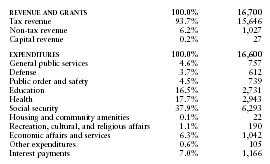