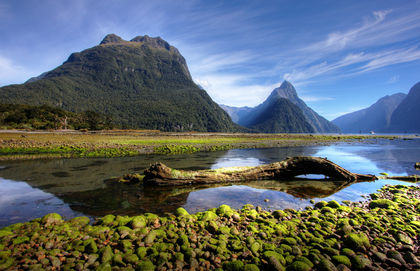 Like other regions separated from the rest of the world for a long period, New Zealand has developed a distinct flora. About 75% of the native flora is unique, and it includes some of the world's oldest plant forms. However, the flowering plants, conifers, ferns, lycopods, and other vascular tracheophytes that constitute much of the land vegetation do show affinities with plants of the Malayan region, supporting the theory of an ancient land bridge between the two regions. More than 250 species are common to both Australia and New Zealand. The Antarctic element, comprising more than 70 species related to forms in the flora of South America and the Southern Ocean islands, is of great interest to botanists. The kauri pine, now found only in parts of the North Island, for more than a century has been world famous for its timber. The rimu and the totara also are timber trees. Other handsome trees include the pohutukawa and other species of rata and kowhai. New Zealand flax, formerly of great importance in the Maori economy, is found in swampy places. Undergrowth in the damp forests consists largely of ferns, of which there are 145 species; they clothe most of the tree trunks and branches, and tree ferns form part of the foliage. Tussock grass occurs on all mountains above the scrub line and over large areas in the South Island.

Apart from seals and two species of bats, New Zealand has no indigenous land mammals. Some of the land mammals introduced to New Zealand have become pests, such as the rabbit, the deer, the pig (now wild), and the Australian possum. Sea mammals include whales and dolphins.

There is a great diversity of birds, some 250 species in all, including breeding and migratory species. Among the flightless birds the most interesting is the kiwi, New Zealand's national symbol and the only known bird with nostrils at the tip of the bill instead of at the base. Other characteristic birds are the kea, a mountain parrot, and the tui, a beautiful songbird. All but one of the genera of penguins are represented in New Zealand. Several species of birds, the most famous being the Pacific godwit, migrate from breeding grounds in the Arctic Circle to spend spring and summer in New Zealand. There are many flightless insects and a diversity of small life forms.

THIS IS A REALLY GOOD SITE THAT HELPS AND GIVE A LOT OF INFORMATION ABOUT NEW ZEALAND!! KEEP UP THE GOOD WORK :)
2
CHARMAINE FERGUSON

THIS IS REALLY GOOD INFORMATION. IT HAS HELPED ME A LOT IN ASSISTING SOME STUDENTS WITH THEIR SOCIAL STUDIES PROJECT.
3
Ella â¤

This is a great website and helped me heaps during my Humanitites project. Thanks again!
4
Robot

Great website! It really helped me a lot with my science project!
5
Ash hull