Since New Zealand's foreign trade depends on agricultural and livestock products, and since prices for these commodities are volatile, New Zealand's balance of payments may swing sharply from one year to the next. Generally, deficits outweighed surpluses during the 1950s and 1960s. Consistent surpluses were recorded between 1969 and 1973, when international reserves nearly quadrupled. However, a poor trade performance in 1974, largely attributable to increased oil import costs, contributed to a large current accounts deficit. Since then, New Zealand has continued to register payments deficits, which have been partially offset by compensatory financing, including overseas loans.

The US Central Intelligence Agency (CIA) reports that in 2001 the purchasing power parity of New Zealand's exports was $14.2 billion while imports totaled $12.5 billion resulting in a trade surplus of $1.7 billion.

The International Monetary Fund (IMF) reports that in 2001 New Zealand had exports of goods totaling $13.9 billion and imports totaling $12.5 billion. The services credit totaled $4.3 billion and debit $4.2 billion. The following table summarizes New Zealand's balance of payments as reported by the IMF for 2001 in millions of US dollars. 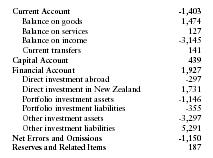