Hinduism and Buddhism exist side by side in Nepal and to some extent are intermingled. The importance of both in the national life is everywhere manifest; more than 2,700 temples and shrines have been counted in the Ka¯thmāndu Valley alone, while innumerable others are scattered along trails and roads extending to the most distant mountain passes. Bodhnath and Shambunath are famous Buddhist temples. The ancient temple of 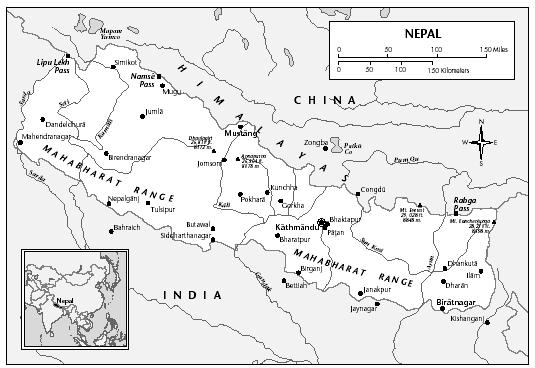 Chandrahigiri is dedicated to both religions. The Baghmati River, flowing through central Nepal, is considered sacred and is visited by pilgrims, as are certain mountains and lakes. The constitution does not establish a state religion but does describe the nation as a "Hindu Kingdom."

A 2002 report indicates that about 81% of the population are nominally Hindu while 11% are Buddhist. Muslims constitute about 4% of the population. Minorities include Christians, Baha'is, Jains, and Kirants (followers of an indigenous animist religion). The constitution forbids proselytizing.