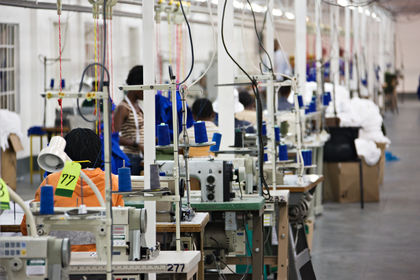 Until the 1980s, modern industry was almost nonexistent; only0.66% of Nepal's GDP was derived from industry in 1964/65. Since then, industrial development has been given emphasis in economic planning. Manufacturing as a percent of total GDP at current factor cost rose from 4.2% in 1980 to 6.1% in 1990 to9.2% in 1995 to an estimated 22% in 2000. However, manufacturing is a sector that has been hit particularly hard by the Maoist insurgency and the intensification of violence since 2001. The CIA estimates that the industrial production growth rate for 1999/2000 was 8.7%. However, this had dropped to less than 1% for 2001/02 according to IMF estimates.

Starting in the 1930s, a number of public enterprises (PEs) were established by the government with an aim of building an industrial and manufacturing base. About 62 PEs in all were established, close to half in the industrial sector, with others in the trading, service, public utility and financial sectors. The oldest surviving PE is the Biratnagar Jute Mills (BJM), set up in 1936. The jute industry has been in decline since 1966. In 2002 BJM was being operated by a private conglomerate on terms of a five year lease from the government. PEs in the industrial sector include cement factories, brick factories, sugar mills, textile mills, jute products factories, tool factories, foundries, and industrial chemical and fertilizer factories. From the early 1990s, there have been planned campaigns to reform and privatize the PEs. By the beginning of the Ninth Five-Year Plan (1997–2002), 16 PEs, over half industrial, had been handed over to private owners, and four had been shut down. A list of 30 PEs, 13 in the industrial sector, were scheduled for privatization during the Ninth FYP, but, in fact, only one, the Nepal Tea Development Corporation, has been privatized. The slowdown of the reform is attributable to both the outbreak of the Maoist insurgency in 1996 and a growing resistance to the privatization program from many sides, but particularly from workers' unions who perceive jobs as threatened. The PEs were not originally set up as commercial enterprises, and most do not even maintain updated accounts that would allow an auditor to assess their market viability. Analysts generally agree, however, that they are inefficiently overstaffed with low skill labor, and that currently most of the industrial PEs have a negative worth. The IMF estimates that net profits from the PE sector as a whole plunged from around NR 3 billion (about $44 million) in 1998/99 to NR 240 million (about $3.23 million) in 2000/01, despite continued government transfers and investment. That the figure remained positive is due virtually entirely to the profitability of three public utility PEs. Some of the known liabilities in the industrial sector include wage arrears that reached sixteen months for the Agricultural Tool Factory, and four months for the Lumbini Sugar Factory. According to a recent study of eight industrial PEs reported by the IMF, employees of these companies are owed for gratuity, sick and home leaves, medical allowance and insurance premiums to the amount of about NR 15.2 billion (about $204 million or 3–4% of Nepal's GDP). There are also large arrears to banks and suppliers, but monitoring mechanisms are insufficient to make reliable estimates. In February 2002, the government set up a special financing facility at 3% interest to encourage commercial banks to provide concessional loans to ailing industries, particularly those in the garment and hotel industries, which through exports and tourism are major earners of foreign exchange.

Heavy industry includes a steel-rolling mill, established in 1965, which uses imported materials to produce stainless steel. During the 1980s, the government gave priority to industries such as lumber, plywood, paper, cement, and bricks and tiles, which make use of domestic raw materials and reduce the need for imports. Production by heavy industries in 1995 included 326,839 tons of cement and 95,118 tons of steel rods.

To stop the pollution in Nepal the government have to seperate the industrial area so, that the industry cannot harm the residental areas.

i think this is great info thanks ppl u all rock and i love you you dont know how much i want to thank you!!!!!!!!
5
Om Basnet

Really i appreciate to this site, im proud of this effort, i used it as a part of my report. thanks for the team.
6
shreya

This site has helped me alot.but still I would like to know about more of nepal's industries such as where those it throws its waste materials,those they protect the environment,etc.pls if u know u can mail me at eya_shreya@hotmaail.com by 8th october.

Thank you guys for these kind of informations really help youths like us to know about our country's industry and it's economic scenario. But, I would like to request you to input more detail materials and elaborate informations of other industries as well, like financial sectors, liqors industry etc.

it help me a lot in project just thanks .. information made my project too much o some !
10
saurav

I like to find a job in neppal preferably in food industries.How can i do that
12
mamamia587

Thank You so much. This page saved my project that i have in school. Thank You again! :D
13
Milan Patel

Could you please supply me with the list of food industries (total) in Nepal?
Thanks
15
aadesh cysta

Thank you so much. This page saved my project that i have in school.
Thank you
Aadesh Shrestha
16
Nirdesh

Thank you so much. This web site helped a lot for my project.