Despite large recorded trade deficits, Nepal often maintains a surplus in its current account thanks to surpluses in services (including tourism), official aid transfers, and increasingly large remittances from Nepalese living abroad, and in spite of unrecorded trade and smuggling across the Indian border. The IMF reported small surpluses on Nepal's current account of $24 million and $28 million respectively, for the fiscal years 1998/99 and 1999/2000, even exclusive of official aid transfers. Adding in official transfers brought the total current account surpluses for these years to $98 million and $114 million, respectively, representing 2% to 3% of GDP. Nepal's overall balance of payments was positive for the fiscal years 1998/99 and 1999/2000, at $136 million and $192 million, respectively, as outflows of capital and other payments were estimated to be more than offset by inflows of capital grants and official disbursements. However, in 2001/02, by IMF's preliminary estimate, Nepal's overall balance of payments was a negative $77 million (1.4% of GDP) due primarily to a falling off in foreign aid. Official reserves held by the central bank in 2000/01 were initially estimated to be sufficient to cover 6.7 months of imports, just above the 6 months' coverage deemed financially prudent. However, of these reserves, about $290 million were being held in Indian rupees, with about $732 million in convertible currencies, enough to cover only 4.8 months of imports. Total external debt in FY 2000/01 was $2.55 billion, about 46% of annual GDP. Nepal's debt service ratio (the ratio of annual payments on the debt to annual exports) was a low 6% in this period, reflecting the highly concessional nature of its external finance. Nepal's debt has never been rescheduled. Its last arrangement with the IMF was in October 1992 under the Extended Structural Adjustment Facility (ESAF), for a line of credit of SDR 33.5 million—47% of Nepal's quota—of which only half, SDR 16.79, was ever drawn down by Nepal. The obligation was scheduled to be fully repaid by 2006, with payments of SDR 2.4 million in 2003; SDR 0.8 million in 2004; SDR 0.2 million in 2005; and SDR 0.2 million in 2006.

The International Monetary Fund (IMF) reports that in 2001 Nepal had exports of goods totaling $721 million and imports totaling $1.49 billion. The services credit totaled $413 million and debit $215 million. The following table summarizes Nepal's balance of payments as reported by the IMF for 2001 in millions of US dollars. The US Central Intelligence Agency (CIA) reports that in 2001 the purchasing power parity of Nepal's exports was $757 million while imports totaled $1.6 billion resulting in a trade deficit of $843 million. 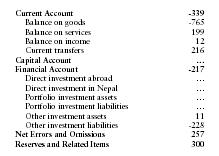 m a mba student writing report on the same topic regarding balance of payment in nepalese schenario.i would like to get more additional information in more detail format about only BOP.