The government presents its budget in March for the 1 April–31 March fiscal year. The public sector budget typically shows an overall deficit because of economic mismanagement. 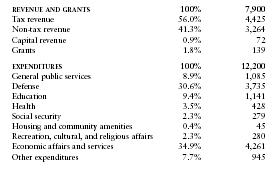