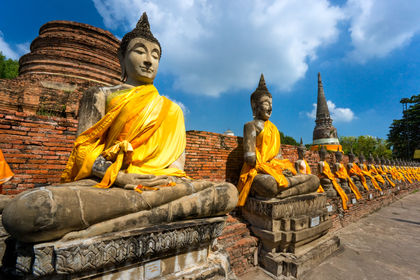 Myanmar has a largely tropical climate with three seasons: the monsoon or rainy season, from May to October; the cool season, from November to February; and the hot season, generally from March to April. Rainfall during the monsoon season totals more than 500 cm (200 in) in upper Myanmar and over 250 cm (100 in) in lower Myanmar and Yangon (formerly Rangoon). Central Myanmar, called the dry zone, and Mandalay, the chief city in the area, each receive about 76 cm (30 in). The mean annual temperature is 27° C (81° F ); average daily temperatures in Yangon (Rangoon) range from 18° to 32° C (64–90° F ) in January, during the cool season, and from 24° to 36° C (75–97° F ) in April, during the hot season. The climate in upper Myanmar, particularly at altitudes ranging from about 300 to 1,220 m (1,000–4,000 ft), is the most temperate throughout the year, while lower Myanmar, especially in the delta and coastal regions, is the most humid.

I THINK IT IS A GREAT THING TO LEARN SO MUCH ABOUT THIS CULTURE. AND I AM BURMESE. I WOULD LIKE TO LEARN MORE ABOUT THIS COUNTRY.
2
Joseph

This is a really great information to know. Helped me out on my culture fair..
3
Qiao yong

thanks for the information, if material is available i would like to know more about climate situation during monsoon season, such as height of swell, gusts etc, average statistics is better, we are gonna commence an offshore activities, located at south of Yangon.
4
Tristan

This helped a lot with my research paper, It helped with the climate section and I used this site in my bibliography thanks a lot for the info
5
Quiara

I think that whoever created this explanation for Myanmar's Culture, did a great job explaining it correctly and easy to comprehend