The annual budget is submitted to the People's Great Hural for approval. Privatization did not begin until fiscal year 1990/1991 along with political upheaval. Privatization of large state businesses has begun, as has the implementation of tax reforms. Most small businesses were private as of 2001.

The US Central Intelligence Agency (CIA) estimates that in 2000 Mongolia's central government took in revenues of approximately $262 million and had expenditures of $328 million. Overall, the government registered a deficit of approximately $66 million. External debt totaled $760 million. 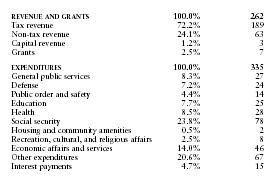