Archaeological investigations show that the land now known as Mongolia has been inhabited since the Lower Paleolithic period, more than 130,000 years ago. By about 1000 BC , animal husbandry of the nomadic type had developed, and by the 3d century BC , a clan style of organization based on horsemanship had emerged. The Huns, a Turkic-speaking people, driven westward during the Han dynasty in China (206 BC – AD 220), created a nomadic empire in central Asia that extended into 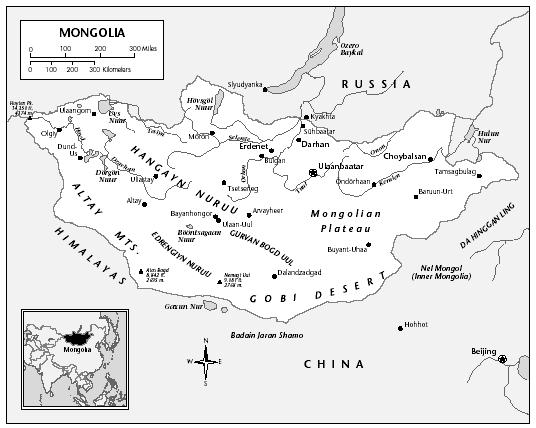 Europe, beginning about AD 370. It reached almost to Rome under the leadership of Attila (r.433?–453) and declined after his death. Mongolia first played an important part in world history in AD 1206, when the Mongol tribes united under the leadership of the conqueror Temujin, or Genghis Khan. The Mongols set up their capital at Karakorum and established a vast empire extending from the northern Siberian forest to Tibet and from the Caspian Sea to the Pacific. After the death of Genghis in 1227, his empire was divided among his sons into Mongol states, or khanates: the Great Khanate of East Asia, which included the Yüan dynasty of China, and reached its peak under Kublai Khan (r.1260–94), who established his capital at Cambaluc (now Beijing); the Khanate of Chaghadai (Djakhatai) in Turkestan; the Hulagid Khanate, founded by Hulagu Khan in Persia; and the Golden Horde in southern Russia, founded by Batu Khan, who invaded Poland and Hungary in 1240. Having crossed the Danube River, Batu withdrew in 1241. The Mongols' century of dominance in Asia allowed for great trade and cultural interchange but also led to the spread of the bubonic plague to Europe.

During the 14th century, the great Mongol states disintegrated. The Yüan dynasty in China collapsed in 1368, to be replaced by the Ming dynasty; the western part of the Turkestan Khanate was incorporated into the empire of Timur in 1390; Hulagu's Persian empire disintegrated after 1335; and the Golden Horde was attacked and shaken by the forces of Prince Dmitry Donskoy in Russia in 1380 but ruled South Russia into the 15th century. In 1369, at the age of 33, Timur, also called Timur Lenk ("Timur the Lame") or Tamerlane, proclaimed himself ruler of all the land lying between the Tien Shan and the Hindu Kush mountain ranges. The Mongols retired to their original steppe homelands, splitting into three major groups: the northern Khalkha Mongols, north of the Gobi Desert; the southern Chahar Mongols, south of the Gobi; and the western Oirat Mongols. Babur, a descendant of Timur, founded the Mughal (or Mogul) Empire (so called from the Farsi word for "Mongol") in India in 1526; it lasted until the 18th century. Buddhism, which had been introduced by Tibetan monks in the 15th century, became widespread in the 16th and 17th centuries.

A cleavage developed between the northern (outer) Mongols and the southern (inner) Mongols, who had been more closely associated with Mongol rule in China. In the course of conquering China, the Manchus subdued the southern Mongols in 1636, placing them under the eventual rule of China's Qing (Ch'ing) or Manchu dynasty (1644–1911). The northern Mongols, who had been fighting with western Mongols for supremacy, sought Manchu aid against their foes and accepted Manchu suzerainty in 1691. Finally, the Manchus destroyed the western Mongols as a historical force in 1758. The Russian-Chinese border treaties of Nerchinsk (1689) and Kyakhta (1727) confirmed Chinese rule over both the southern and northern Mongols but assigned the Buryats to Russia.

Following the overthrow of the Manchu dynasty by the Chinese revolution in 1911, northern Mongol princes proclaimed an autonomous Outer Mongolia under the rule of Bogdo Khan, the Living Buddha (Jebtsun Damba Khutukhtu) of Urga, an earlier name of Ulaanbaatar. A treaty with the tsar's government pledged Russian assistance for the autonomous state. After the Bolshevik Revolution, the Chinese exploited Russia's weakness, reoccupying Outer Mongolia in 1919 and ending its autonomy. In early 1921, the Chinese were driven out by Russian counterrevolutionary forces under Baron von Ungern-Sternberg. He, in turn, was overcome in July 1921 by the Mongol revolutionary leaders Sukhe Baatar and Khorloin Choybalsan, assisted by the Soviet Red Army. Under Soviet influence, a nominally independent state, headed by the Living Buddha, was proclaimed on 11 July 1921 and lasted as a constitutional monarchy until his death in 1924.

The Mongolian People's Republic (MPR), the second communist country in world history, was proclaimed on 26 November 1924. With the support of the former USSR, Communist rule was gradually consolidated. Large landholdings of feudal lords were confiscated, starting in 1929, and those of monasteries in 1938. A 10-year mutual assistance treaty, signed in 1936 and renewed for another 10 years in 1946, formalized the close relations between the former USSR and the MPR. In the summer of 1939, with Soviet support, the Mongolians fought invading Japanese along the border with Manchuria, ending with a solid defeat for the Japanese in September. After a virtually unanimous plebiscite by the Mongolians in favor of independence, the Nationalist government of the Republic of China formally recognized the MPR in 1945 (it withdrew its recognition in 1953) and the Nationalists on Taiwan still claim Mongolia as part of China. On 14 February 1950, the People's Republic of China and the former USSR signed a treaty that guaranteed the MPR's independence. In October 1961, the MPR became a member of the United Nations. Conflicting boundary claims between the MPR and China were settled by treaty on 26 December 1962, and on 30 June 1964 the MPR and the former USSR signed a 20-year treaty of friendship, cooperation, and mutual assistance. In June 1987, the MPR and the United States established diplomatic relations. With the growth of cities around the mining industry, Mongolian society shifted from being 78% rural in 1956 to being 58% urban in 1989.

With their close ties with the former USSR, Mongolians were well aware of Soviet policies of glasnost (openness) and perestroika (restructuring) and of the democratic movements in Eastern Europe after the mid-1980s. The MPR initiated its own policy of "openness" (il tod) and began economic reforms to serve as transitional steps away from a centrally planned, collective economy and toward a market economy. Following the first popular demonstrations calling for faster reforms, in Ulaanbaatar in December 1989, the ruling Mongolian People's Revolutionary Party (MPRP) opted for political as well as economic reforms. The MPRP's leadership resigned in March 1990 and in May the constitution (of 1960) was amended to allow for new, multiparty elections, which took place in July. The MPRP won a majority (85% of the seats) in the legislature, the People's Great Hural (PGH), which took office in September. The PGH elected as president a member of the MPRP, Punsalmaagiyn Ochirbat, but invited the opposition parties to join in forming the new government.

During 1991, the new government discussed Mongolia's economic and political transformation. It issued vouchers to all citizens for the purchase of state property as a step toward privatization. Economic reform was made more difficult by the economic collapse of the former Soviet Union. In 1991, Russia insisted on trade based on cash rather than barter and dramatically cut aid. By 1992, Mongolia faced severe energy shortages. In 1991, the PGH also discussed the writing of a new constitution, which took effect in February of the next year. Based on that constitution, elections in June 1992 created a new legislature (with a MPRP majority), the State Great Hural (SGH) and, in June 1993, President Ochirbat was reelected (but with the support of a coalition of new parties, not the MPRP) in the first direct presidential elections. By September 1992, some 67,000 former Soviet troops (in Mongolia since 1966 when Sino-Soviet tensions increased) completed a process of withdrawal begun in 1990.

In the 1996 parliamentary elections, discontent, especially among the young, led to the defeat of the MPRP. The leaders of the winning Democratic Union Coalition (DUC), mostly political novices, promised to intensify market reforms. The election results marked the first smooth transfer of power in Mongolia's modern history and one of the most peaceful among all the former communist nations. In the following years, however, the stability and effectiveness of Mongolia's democratic government were hobbled by disunity within the majority DUC and by the political stalemate between the DUC and the ex-communists of the opposition MPRP. In late 1996 and early 1997, the MPRP prevailed in local elections, and its candidate, Natsagiyn Bagabandi, was elected president. After the resignation of two prime ministers, the nation was left with an interim government in the second half of 1998, as Bagabandi rejected multiple DUC nominees for the post.

In October 1998 the country was shaken by the murder of Sanjaasurengiyn Zorig, a pro-democracy leader and government minister who had been tapped to be the next DUC nominee for prime minister. By August 1999, yet another DUC government had fallen, and Rinchinnyamiin Amarjargal, the 38-year-old former foreign minister, became Mongolia's third prime minister in 15 months.

On 2 July 2000, parliamentary elections were held that resulted in an overwhelming victory for the MPRP. The MPRP took 72 of 76 seats in the State Great Hural, with only 4 seats going to opposition members. Nambaryn Enkhbayar was named prime minister. On 20 May 2001, Bagabandi was reelected president with 58% of the vote, giving the MPRP control of both the presidency and parliament. The elections were characterized by international observers as free and fair.

In November 2002, the Dalai Lama visited Mongolia, a trip denounced by China. China warned Mongolian officials not to meet with the Tibetan spiritual leader, and briefly suspended train services with the country. Thousands of Mongolian Buddhists attended the Dalai Lama's speech on 6 November.

As of early 2003, the country continued to face problems of high unemployment, poor welfare and education systems, corruption, crime, and harsh winters. The severe winter of 2001 killed at least 1.3 million livestock; approximately 40% of Mongolians depend upon the country's 30 million livestock for their livelihood. Mongolia, though engaging in increased privatization of state-owned enterprises to speed the country's alignment with free market principles, has been careful to dedicate a percentage of the resulting revenues to social programs.