Mongolia consistently imports more than it exports. The sudden discontinuance of grants and debt cancellations by the former Soviet Union devastated the balance of payments position. Subsequently, the IMF in 1993, 1997, and 2001 approved a series of three-year loans to Mongolia, the last due to expire in September 2004.

The US Central Intelligence Agency (CIA) reports that in 2000 the purchasing power parity of Mongolia's exports was $466.1 million while imports totaled $614.5 million resulting in a trade deficit of $148.4 million.

The International Monetary Fund (IMF) reports that in 2001 Mongolia had exports of goods totaling $460 million and imports totaling $549 million. The services credit totaled $86 million and debit $174 million. The following table summarizes Mongolia's balance of payments as reported by the IMF for 2001 in millions of US dollars. 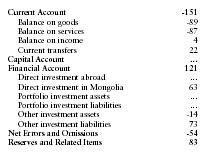