Public enterprises, including the State Trading Organization, the state shipping line, and public utilities, account for nearly half of government revenues; customs and tourist receipts make up most of the rest. 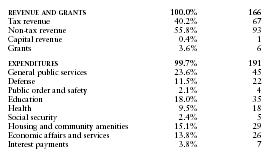