Balance of payments deficits during the first half of the 1980s were caused largely by the international shipping recession, the collapse of world tuna prices, and a brief downturn in tourism caused by the violence in nearby Sri Lanka. The government began an economic reform program in 1989, by lifting import quotas and opening some exports to the private sector. In recent years, it has encouraged more foreign investment by liberalizing regulations.

The US Central Intelligence Agency (CIA) reports that in 2000 the purchasing power parity of Maldives' exports was $88 million while imports totaled $372 million resulting in a trade deficit of $284 million.

The International Monetary Fund (IMF) reports that in 2001 Maldives had exports of goods totaling $110 million and imports totaling $348 million. The services credit totaled $354 million and debit $109 million. The following table summarizes Maldives' balance of payments as reported by the IMF for 2001 in millions of US dollars. 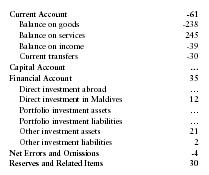