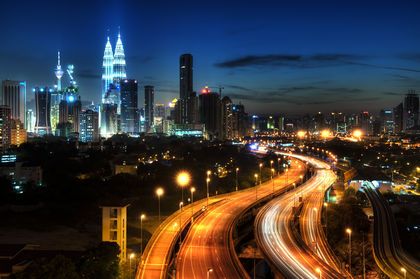 Not until British economic enterprise first attracted foreign labor after 1800 did large-scale Chinese, Indian, and Malaysian migration (nonnative Indonesians and Borneans) take place. The early migrants were transients: in 1921, only 20.3% of the Chinese and 11.9% of the Indians were Malayan-born. However, migration data for subsequent years show a general tendency toward permanent settlement by these nonindigenous portions of the population. The percentages of the total Chinese population reporting Peninsular Malaysia as their birthplace were 29.1%,62.5%, and 74.4% for the years 1931, 1947, and 1957, respectively; the percentages of Indians reporting their birthplace as Peninsular Malaysia were 21.1%, 51.4%, and 64.6% for the same respective years. By 1953, the Malays were a minority in their own territory. The government enacted legislation restricting further immigration, and by 1968 the Malays formed slightly more than 50% of the population. Regulations which took effect in 1968 concerning passports and border crossings between Malaysia and Indonesia and between Malaysia and the Philippines were also intended to restrict immigration. By 1970, more than four-fifths of the Chinese and Indians were born in Peninsular Malaysia. Between 1975 and 1996, Malaysia hosted more than 250,000 Indo-Chinese refugees and permitted the local integration of some 45,000 Filipino refugees in Sabah. Between 1975 and 1989, more than 250,000 Vietnamese refugees found asylum in Malaysia; the vast majority subsequently migrated to other countries. Some 3,797 Vietnamese refugees still remain in Malaysia, but are to return home according to government authorities. The legal position of the 5,000 or so Muslims from Myanmar, who possess no documentation as citizens of Myanmar, had not been addressed by the government as of 1999. The net migration rate in 1999 was zero; however, this figure does not reflect the number of illegal immigrants, including large numbers from Indonesia and smaller numbers from the Philippines, Bangladesh, Myanmar (Burma), China, and India.

In 2000 there were 1,392,000 migrants living in Malaysia, including 50,500 refugees. The net migration rate in that year was 0.4 migrants per 1,000. These numbers do not reflect the unknown number of illegal immigrants from other countries in the region. The government views the immigration level as too high, but the emigration level as satisfactory.

Malaysia is a nice country. I want to live malaysia.
2
aliasghar

quite helpful but i would like this to be simpler so that more people could understand.
4
sama

I'm a medical graduate.What r the procedure to apply for skilled migration in Malayasia from Bangladesh?