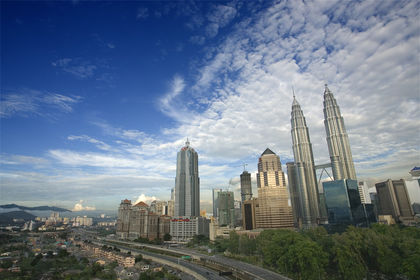 Malaysia was one of the most prosperous nations in Southeast Asia before 1998, albeit with the mood swings inherent in an export-oriented economy. Until the 1970s, Malaysia's economy was based chiefly on its plantation and mining activities, with rubber and tin the principal exports. Since then, however, Malaysia has added palm oil, tropical hardwoods, petroleum, natural gas, and manufactured items, especially electronics and semiconductors, to its export list. This diversification greatly reduced the nation's dependence on overseas commodity markets. By 1980, rubber accounted for about 7.5% of the value of all exports, down from 30% in the 1970s, and tin for about 4.3%, down from about 20% in the 1970s. The worldwide recession in 1981–82 hurt the Malaysian economy. Prices of Malaysia's traditional commodity exports were depressed, growth slowed, and investment fell. Government efforts to stimulate the economy through spending on heavy industry and infrastructure projects financed by borrowing pushed foreign debt from $4 billion in 1980 to $15 billion in 1984.

The Asian financial crisis put an end to 13 years of uninterrupted growth with a decline in GDP of -7.4% in 1998. The government's response was to embark on a massive economic recovery program, aimed at stabilizing the currency, restoring market confidence, maintaining market stability, strengthening economic fundamentals, furthering socioeconomic goals, and reviving badly affected sectors. The program featured two fiscal stimulus packages amounting to 2.25% of GDP and the establishment of three special purpose agencies: the Danaharta—also known as the National Asset Management Co.—to acquire and dispose of non-performing loans (NPLs); the Danamodal, charged with implementing government policy on recapitalizing financial institutions, and the Corporate Debt Restructuring Committee (CDRC), to facilitate voluntary debt restructuring between creditors and viable corporate debtors. More controversially, the government has proceeded, in 2000, with previous directed merger plans to consolidate Malaysia's banks into 10 "anchor" banks, and to consolidate Malaysia domestic brokerage houses into 15 "universal brokers," the rationale being that larger entities would be better able to compete with international counterparts. Gross domestic product growth recovered to 6.3% in 1999 and increased to 7.9% in 2000, but was reduced to .7% in 2001 as the global economic slowdown and the aftermath of the 11 September 2001 terrorist attacks on the United States helped produce a 10.6% reduction in exports.

In 2002, the economy continued to recover, reaching an annual growth rate of about 3.5%. Since late 2001, Malaysia has taken a leading role, with Bahrain, in seeking to institutionalize Islamic banking. In November 2001 Malaysia signed an agreement along with Bahrain, Indonesia, Sudan and the Saudi-based Islamic Development Bank (IDB) to establish the International Islamic Financial Market (IIFM). This is an extension of its domestic efforts to foster Islamic banking going back to the Islamic Banking Act of 1983, under which it was the first Islamic economy to issue bonds on an Islamic basis. In June 2002 Malaysia took the lead in offering the world's first Islamic global bond issue. The Islamic bond is a problem because Islam forbids paying or receiving interest. The 144a offering (not subject to SEC disclosure regulations) in the name of an SPV (special purpose vehicle), the Malaysia Global Sukuk (MGS), involves MGS buying from the Malaysian government the Ministry of Finance building, two hospitals and a civil service accommodation, and leasing them back to the government for a period of five years, during which time the government issues trust certificates to the investors with payments payable exactly equal to lease rental payments being made by the government to MGS. At the end of five years, in 2007, the government will buy back the properties at the face value of the bond. These arrangement were judged compliant with Islamic law. The Trust Certificates had their primary listing on the Luxembourg Stock Exchange in August 2002, and their secondary listing on Malaysia's Labuan International Financial Exchange (LFX) in September 2002. The LFX is part of Malaysia's Labuan International Offshore Financial Centre (IOFC), established in October 1990 by the government to provide a full array of financial services for multinational corporations and investors. The MSG Certificates are part of a recent effort to provide Sharia-compliant instruments for a growing Islamic financial market, estimated in 2002 at $200 billion. The Labuan Offshore Financial Services Authority (OFSA) takes credit for initiating the idea for the establishment of the IIFM in November 2001. A Malaysian heads the IIFM, and the Islamic Financial Service Organization (IFSO) is headquartered in Malaysia. As host country for the IFSO, Malaysia will lead in formulating and developing standards for the regulation of Islamic financial institutions

In 1990, Malaysia was the world's largest producer of natural rubber accounting for one-quarter of world production. By 1993, however, production was overtaken by both Thailand and Indonesia. During the late 1990s, production of synthetic rubbers undercut the natural rubber industry. In 1990 Malaysia was the world's largest exporter of tropical hardwood, the world's fourth-largest producer of cocoa, and the source of 60% of the world's palm oil (1990). By 2001, Malaysia exported over half of the world's fixed vegetable oils, accounting for approximately 6.7% of Malaysia's exports. The manufacturing sector made up about 90% of exports in 2002, up from about 69% of exports for 2002, with electronics accounting for two-thirds of total exports. Malaysia remains a major producer of commodities including rubber, tin, palm oil, tropical hardwoods, cocoa and pepper. It also produces and exports oil, petroleum products and liquefied natural gas, amounting to 5% of total exports in 1998.

Government or government-owned entities dominate a number of sectors (plantations, telecommunications, and banking). Since 1986 the government has moved toward corporatization and the eventual privatization of telecommunications, ports, highways, and electricity production and distribution. In the 1990s, the government embarked on a privatization program aimed at creating a Malaysian business elite as part of the its bumiputura (literally, "sons of the soil") policy. However, virtually all the major privatized companies failed in the Asian financial crisis, 1997–98, including the carmaker Proton, Malaysian Airlines, the engineering group Renong and the media group, Malaysian Resources, and were renationalized in the aftermath, and in 2002, the business remains dominated by non-Malays. The official unemployment rate at 2.6% in 1996, had risen to 3.6% in 2001. The inflation rate as measured by consumer prices, at 5.1% for 1998, fell sharply in the succeeding years to 1.6% in 2000, 1.4% in 2001, and 1.8% in 2002. Sarawak's basic economy is subsistence agriculture, supplemented by petroleum production and refining, the collection of forest produce, fishing, and the cultivation of cash crops, primarily rubber, timber and pepper. Sabah's economy rests primarily on logging and petroleum production.

Is there any one time that Kenya's economy was doing better than Malaysia's?
If yes to what extent.
2
keyn

i would like to ask what measures could be taken if Malaysia suffers from a persistent negative balance of payments problem?
3
Sloan

Can you please tell me the legal risks that a company would be facing while exporting to malaysia. And how much money can they back to their home country from the sale of the products
4
Diyana

But What is the main Problem of Heavy Industry and the implication of global crisis in Malaysia? Specifically ?