Malaysia sustained a favorable trade balance throughout the 1960s and 1970s, recording its first trade deficits in 1981 and 1982, as world prices for tin, crude oil, rubber, and palm oil, the major exports, weakened simultaneously. Malaysia's balance of payments, like that of many other producers of primary products, was adversely affected in 1981–82 by the prolonged recession in the world's industrial nations. From 1983 to 1986, however, Malaysia registered trade surpluses. In the 1990s, a significant growth in exports and a decrease in imports led to trade surpluses, along with a fairly large services deficit. In the early 2000s, however, exports declined, but so did imports of intermediate components used in the manufacture of the country's electronics exports; this contributed to continuing strong trade surpluses.

The US Central Intelligence Agency (CIA) reports that in 2001 the purchasing power parity of Malaysia's exports was $94.4 billion while imports totaled $769 million resulting in a trade surplus of $93.631 billion.

The International Monetary Fund (IMF) reports that in 2000 Malaysia had exports of goods totaling $98.4 billion and imports totaling $77.6 billion. The services credit totaled $13.8 billion and debit $16.7 billion. The following table summarizes Malaysia's balance of payments as reported by the IMF for 2000 in millions of US dollars. 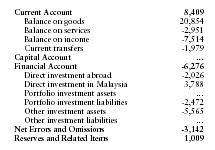 Good morning,
i am an universiti student. May have a data of foreign reserves in Malaysia. I requsting the data for my final year project. I hope sir or would reply me. thank tou.
2
sravan

may i know where can i have the Malaysia's Balance of payments data (in US Dollars) from year 1982 to 2008? Urgently needed for my current assignment.
4
steven