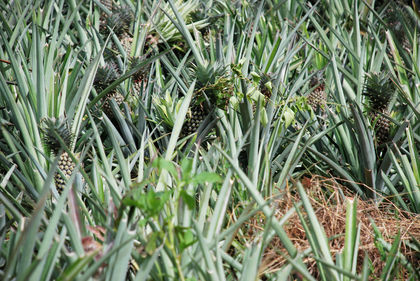 Agriculture is no longer the most important sector of the Malaysian economy, contributing 12% of GDP in 2001 (down from 38% in 1960) and occupying about 16% of the employed work force in that year. Nevertheless, agriculture still accounted for 6.3% of export earnings in 1997. Diversification—including development of such newer crops as oil palm, cocoa, and pineapples—is promoted by the government. Much of Sabah and Sarawak is covered with dense jungle and is not conducive to farming. Peninsular Malaysia, however, is predominantly an agricultural region. Cultivation is carried out on the coastal plains, river valleys, and foothills.

Domestic rice furnishes Peninsular Malaysia with about 80% of its requirements; most of the rice supply for Sabah and Sarawak, however, must be imported. Milled rice production for 1999 totaled 1,934,000 tons, of which about 70% came from Peninsular Malaysia. Rubber production totaled 886,000 tons in 1999. The government, through the Rubber Research Institute of Malaysia, has concentrated on improving production, but many estates have switched to production of the more profitable oil palm. Although Malaysia produced 14% of the world's rubber in 1999, and typically accounts for over one-third of the world's rubber exports, rubber is no longer the country's primary source of export income. Competition from Thailand and Indonesia has recently diminished the Malaysian market share for rubber.

I have an essay on agriculture in malaysia and i am looking for information on the different types of products they inport and export such as rice, tabacoo and cocoa please email me as much as you can and in detail.
4
Andrew Pressler

I am an American Chef specializing in southeast asian cuisine. i have found it difficult to find the same quality of Malaysian ingredients in N.Y.C. as are freely available in Malaysia. I am interested in contacting Maylasian producers and exporters who are interested in expanding their markets and giving professionals like myself access to their products. The ability to showcase malaysian cuisine in as authentic a way possible while opening markets for the producers and exporters of maylay produce, spices, as well as canned and bottled products is my goal. If you have any information that may be helpful please contact me via email
5
cj

i have a assignment to research on Sarawak GDP from year 2005-2008 but it hard to get detail information from the google as it focus more on West Malaysia economic. Can i get the specific website for only Sarawak economic?
6
Eugene

I am an American and I want to start an exporting business, exporting palm oil seeds, crude palm oil and red palm oil. I am looking for two people as business partner base on Malaysian rules. It would help if these persons have some knowledge of the business and welling to help build the business. Also, to export these products you need a certificate from the Agroculture department. It would also help if they know where and how to get it or do you know what the process is in getting it?
You can contact me at palmoil_treeseeds@yahoo.com.
7
Dr. Giri

I am a Nepali and want to establish high prized organic agriculture in the Himalaya. I am interested in Mushroom, truffle and Kiwi. If some business man or persons want to invest in Nepal please contact me at giritripathi@gmail.com
8
huhu

I am very interested in Import Oyster Mushroom to Malaysia. I need to know if this possible and what is the process? Thank Andre Vries
10
billy

I think this website really helped me I will defiantly get a A* in the work that im going at school. my family will be so proud of me
11
baqirahs

I am Tanzania and I m looking for investor to invest in any crop in our country email me if your ready.
13
Storm

Zeeshan, I got a project halalhup at Sarawak.. Do u want to joint ? Pls email dconm2e@gmail.com