Soil erosion, deforestation, and flood control are the principal environmental concerns in Laos, there being only minimal industrial development. The government seeks to control erosion by discouraging the traditional slash-and-burn agriculture practiced by many mountain tribes, and by resettling the tribes in permanent villages.

Reforestation projects have been promoted by the government as a means of increasing lumber exports and of restoring valuable hardwoods to logged-out forest areas. Each person was required to plant five trees in the course of the 1981–85 economic plan. In 1986, the government prohibited the cutting of 15 different 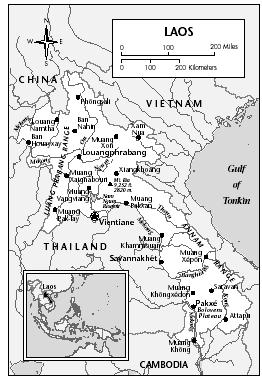 Laos has 190 cubic kilometers of renewable water resources with 82% used in farming activity and 10% used for industrial purposes. Only 61% of city dwellers and 29% of rural citizens have access to safe drinking water. The nation's water supply has begun to decrease due to a combination of factors, among them the loss of forest land, uncontrolled agricultural practices, flooding and drought. Pollution from fires, dust, and cars is also becoming a national problem.