Laos has experienced severe trade deficits since independence. From 1963 through mid-1975, substantial deficit financing was provided through the Foreign Exchange Operations Fund (FEOF), an agency backed largely by the US but also receiving funds from Japan, France, the UK, and Australia. In June 1975, the flight of gold and hard currencies from the country forced the government to ban exports of gold and silver bullion. A devaluation of the kip had the effect of further inflating its price, with the black market exchange rate soaring. In the 1980s, financing came mainly from the former USSR, with smaller amounts from multilateral agencies. Since the collapse of communism in Europe, Laos has lost this vital means of support. Even with its recent attraction of international investment ($5 billion from 1988–94), it still relies heavily on aid. Primary sources are Scandinavia, the US, and Japan. In 1995, the IMF announced a $17 million loan to the country, its second in a series of structural adjustment loans. Laos received a total of $290 million in economic aid in 1998. Total external debt stood at $2.53 billion in 1999. In 2001, the IMF approved a $40.2 million three-year arrangement with Laos, to reduce poverty and support the government's economic reform program. The Lao government is attempting to diversify its trading and investment partners, particularly among other Asian nations.

The International Monetary Fund (IMF) reports that in 2001 Laos had exports of goods totaling $311 million and imports totaling $528 million. The services credit totaled $166 million and debit $32 million. The following table summarizes Laos's balance of payments as reported by the IMF for 2001 in millions of US dollars. The US Central Intelligence Agency (CIA) reports that in 2000 the purchasing power parity of Laos's exports was $325 million while imports totaled $540 million resulting in a trade deficit of $215 million. 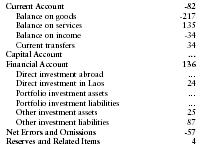